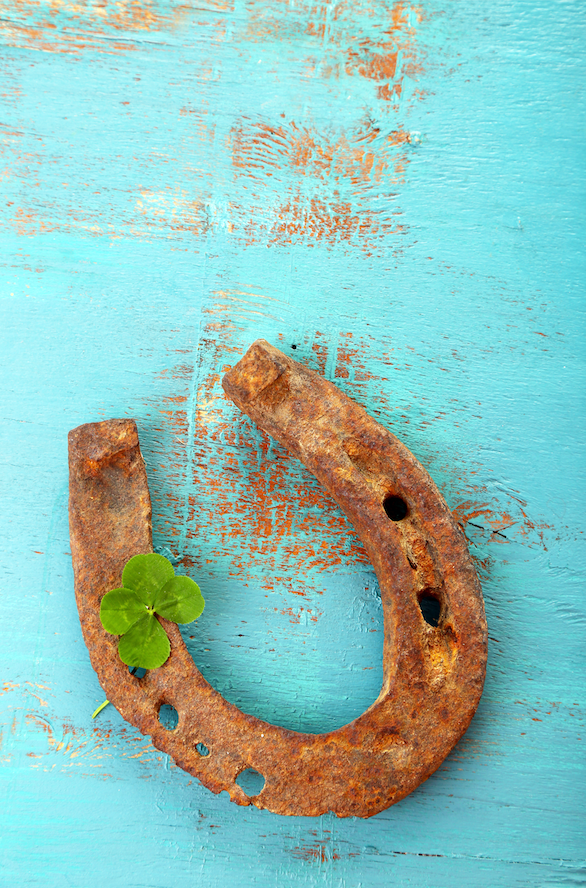 From four-leaf clovers to wishbones to pennies found heads up, certain items around the globe have become symbols of luck. These items are now found in pant pockets, dangling above bed frames and strung from necklaces. But where do these legends originate? What do they really do? Here is a list of some of the (lucky number) seven most common lucky symbols.

In Hinduism, elephants are the animals of several powerful Gods. Building off their religious importance, these massive creatures became a symbol of luck in ancient folklore and mythology. In the practice of feng shui, the elephant represents protection, wisdom, good luck and fertility. Because of its strength, it is often placed in the entrances of homes and establishments as a symbol of stability and protection. According to Greek philosopher, Aristotle, elephants are the wisest creatures in existence and capable of expressing grief and compassion. Their understanding of emotion combined with their impeccable meories makes elephants the perfect good luck symbol to place in a home office or student study area.

An elephant figure with the trunk up symbolizes the showering of good luck. Many Eastern cultures believe that an elephant figure with its trunk down is bad luck, while Western cultures say it symbolizes fertility as it is storing and accumulating energy. Two elephants with their trunks intertwined is representative of friendship and love. Next time you see a symbol of your favorite three-ton mammal, see what good luck it can bestow upon you.

According to the Goethe-Institut, legend says that the Virgin Mary sent ladybugs to help protect crops from aphids and other pests, which ladybugs eat. It is thought to be lucky when a ladybug lands on someone, with the number of black spots indicating the number of months one will encounter good luck. The more vibrant the red of a ladybug, the more powerful the luck. It is also said that killing a ladybug is considered bad luck due to its historic relation to the Virgin Mary.

In Sweden, a ladybug crawling on a young girl’s hand is thought to be taking her measurements for wedding gloves, indicating she will marry soon. In Burgundy, if a ladybug lands on a young lady, the number of spots on the ladybug’s back is indicative of how many children she will bear. Ladybugs are often seen on baby clothes because of their fortuitous power.

The story behind the horseshoe is debated. According to Irish legend, upon witnessing a blacksmith fit and shoe a horse, the devil — a hooved creature himself — decided he wanted a pair of his own shoes and approached the blacksmith. Noticing that the creature was the devil, the blacksmith made the devil’s set too small, trimmed his hooves too short, drove the nails too close together and pinched them too tight to remove. The legend says that the devil limped away in pain and vowed to never go near another horseshoe again.

Now, these metal crescents are placed above the threshold of a room to ward off evil. It is common practice to hang the horseshoe in a “U” formation to collect good luck and fortune. If the shoe is hung upside down, all the luck spills out.

With the power to unlock mysteries only available to the keeper, the key is a symbol of power, knowledge and success. Greek and Roman tradition believes that a key represents the “Key of Life,” which has the power to unlock doors through which prayers travel to reach Gods. Gold and silver keys crossed, such as the ones found in the Hierophant tarot card, are said to be representative of “keys to the kingdom of heaven” and symbolize authority. In Japanese culture, three keys tied together were thought to unlock doors that lead to love, health and wealth. Wear a key around your neck to bring knowledge and success to your daily life.

With origins based in African American hoodoo culture, thought to be brought over during the slave trade, the rabbit’s foot is said to bring fertility. Because rabbits are known to reproduce so quickly, legend says that the carrier of a rabbit’s foot, will soon have children. According to Scientific American, in order to be considered lucky, it is said that the rabbit’s foot must come from the left hind foot and that the rabbit must be obtained in a cemetery. Common practice has now phased out that specification and luck can still be enjoyed by those carrying a faux, plastic, color-dyed rabbit’s foot.

Rooted in Native American culture, the dreamcatcher is believed to filter out all the bad dreams for whoever sleeps underneath it. According to “Chippewa Customs” by Frances Densmore, web-like trinkets were hung from the loop of a child’s cradle to trap evil, like a spider web traps insects. There is typically a small hole in the middle of the dreamcatcher where the good dreams may pass through. Hang one above your bed to have sweet dreams all night long.

The number 7 seems to be a universal reoccurring theme through life. There are seven days in a week, seven seas, seven continents, seven wonders of the world, seven colors in the rainbow, and there are typically seven black spots on a ladybug, which is lucky in and of itself. The number seven appears often across religions as well. Before telescopes, there were only seven celestial bodies visible from Earth – the sun, the moon, Mercury, Venus, Mars, Saturn and Jupiter – which may explain why many religions adopted seven gods or deities. There are seven major chakras recognized in Hinduism and seven lucky gods in Japanese tradition. For many, the number seven is a lucky, protective symbol seen all around.