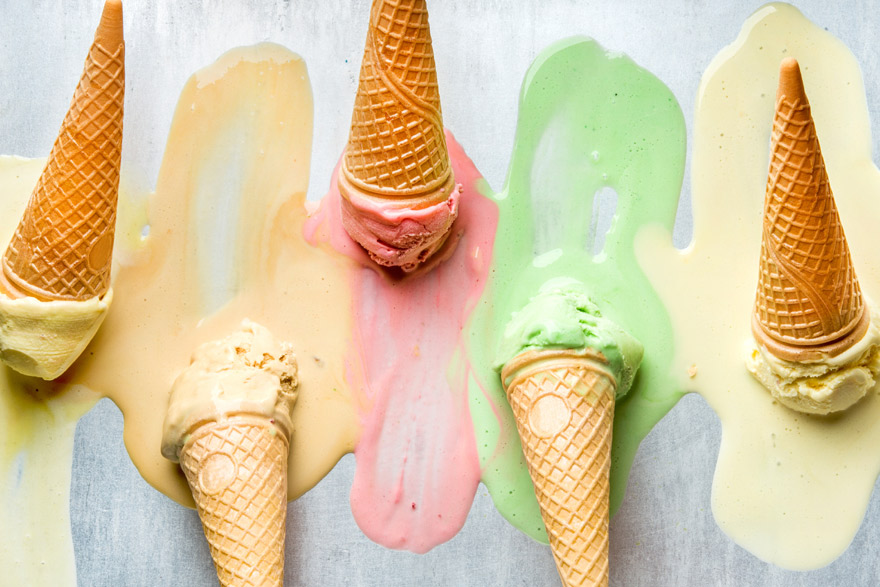 Beat the heat with our favorite summer treat!

Here’s the scoop: whether it’s stacked high in a bowl or melting all over your waffle cone, ice cream is the quintessential summertime snack.

Who Invented the Ice Cream Cone?

There have been conflicting stories regarding the invention of the ice cream cone since its inception. More often than not, the creation is attributed to Ernest Hamwi, who is said to have created the first cone at the 1904 St. Louis World’s Fair. As the story goes, Hamwi was running a booth that sold waffles. When a neighboring vendor selling ice cream ran out of cups, he constructed an edible cone from a fresh waffle, leading to the creation of the ice cream cone.

According to Jane Marchiony Paretti, her father, Italo Marchiony, is the true inventor of the ice cream cone. When Marchiony arrived from Italy in 1895, he operated a push cart on Wall Street, selling lemon ices. After growing tired of losing dishes to breakage or being accidentally taken, he decided to create an edible cup for his customers. He found that a thin waffle could be shaped into a bowl while still warm and would keep its shape. His waffle cups were a hit, and soon af ter Marchiony designed and patented a machine to mass produce the waffles to be made into cups.

The World’s Fair story is also true. As it turns out, according to Paretti, her father was among the vendors at the Fair. When he ran out of the waffle bowls he had brought along, he asked a nearby waffle vendor, Hamwi, to roll a waffle into the next best thing…a cone.

According to a recent survey of International Ice Cream Association member companies, vanilla remains the most popular flavor among their consumers.

According to the Guinness Book of World Records, The tallest ice cream cone measures 3.08 m (10 ft 1.26 in) in height and was achieved by Hennig-Olsen Is AL and Trond L Wøien (both Norway) at Kristiansand, Norway, on 26 July 2015.

According to the International Dairy Foods Association, about 1.53 billion gallons of ice cream and related frozen desserts were produced in the U.S. in 2013.

Ice Cream is created by combining milk, cream, sugar and various other ingredients. It normally takes about 3 gallons of milk to create just 1 gallon of ice cream.

Choosing a flavor is hard enough! Check out our guide below to pick the perfect cone for your creamy concoction.

This iconic-shaped cone may look similar to the waffle cone, but tends to be smaller and crunchier. It’s sweet taste and sturdy cone makes the sugar cone a classic choice.

Perfect for when you can’t choose between a cone or bowl! Waffle bowls are usually made of the sameingredients as the waffle cone, just in a different shape. They are a less messy option than a cone, and you still get to eat it afterwards!

Cake cones have less than 5% sugar and tend to be less expensive than other varieties. This cone also has a built-in support structure to hold even more of your frozen treat!

The fanciest of the ice cream cones, the waffle cone is also the largest and softest option. A blend of cake and pastry flours gives them their sweet and crunchy taste!

Lactose Got You Screaming?

According to a report by National Public Radio, there are 30– to 50 million American adults who cannot produce enough of the enzyme that digests lactose, or milk sugar. This can have them screaming about ice cream… literally. So, what can lactoseintolerance sufferers do when they have the desire to indulge in that cream milk goodness?

First, consult your doctor about supplements of the enzyme lactase or, if that is not an option, change your ice cream selection to lactose-free dairy products, which are made by adding lactase.

At just 76 years young in 2014, Alan Ganz, of Peabody, Massachusetts had been serving ice cream for 67 years when he broke the record for the longest career as an ice cream man. Today, he is now in his 69th year!

Which of these frozen treats have you tried?

Gelato –  Gelato is Italian for ice cream and generally has less fat because it’s made with whole milk instead of cream. Gelato is mostly free of eggs and stabilizers and has about a 3.8% milkfat percentage.

Sherbert –  Sherbet is a frozen fruit and dairy product that contains anywhere from 1 percent to 3 percent milkfat from milk or cream.

Sorbet –  Sorbet is sometimes confused with sherbet because they both contain fruit. However, sorbet has little to no dairy and is mostly made from frozen juices or purees, but can also be made with cocoa.

Frozen Yogurt –  Compared to ice cream, frozen yogurt is usually healthier, but in some cases that 16-ounce “original” or “plain” flavor cup weighs in at 380 calories and 76g of sugar before adding any toppings.