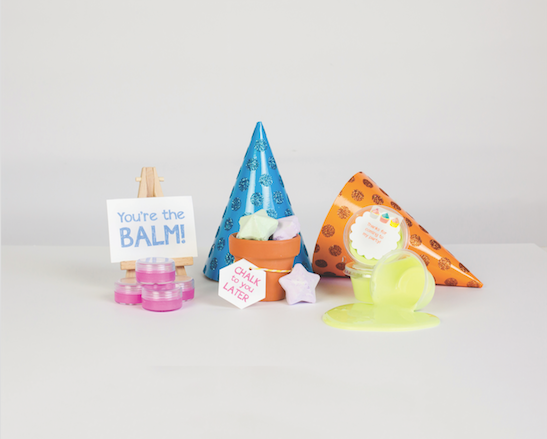 The birthday party games have been played, the cake has been cut, and now it is time for all of your little one’s friends to head back home. But you are not quite done yet! Instead of handing out bags of candy as mementos of your kiddo’s party, consider one of the following DIY birthday party favors! These three favors are all relatively easy to prepare, and your little birthday boy or girl can help out!

Makes about 8 pieces of chalk

Chalk itself is not terribly expensive to purchase, but if you are looking for specific shapes or colors, it can be more cost effective (and fun!) to make it at home.

Combine the Plaster of Paris and the water in a disposable bowl and stir with a disposable spoon or other stirring implement until well combined. Add in a few drops of the tempera paint color of your choice. How much paint you add will depend on how rich you want your chalk color to come out. Then simply fill your silicone molds with your chalk mixture and allow to dry for about 3 hours.

*We found it easier to use disposable items as we did not want to get leftover plaster stuck in our sink drains!

Makes about 8 containers of lip gloss

Your little one can definitely help out with these DIY lip glosses! We kept ours relatively simple, but you can also include cosmetic-grade shimmer dust for a nice sparkle or almond oil for an extra moisturizing finish.

8 tablespoons Vaseline (we used a Vaseline with cocoa butter so it was extra moisturizing and smelled great!)

Lip balm containers (we purchase ours at Hobby Lobby)

Scoop the Vaseline into a microwave safe bowl and heat in 30 second increments until completely melted. Snip off about half of the lipstick and mix it with the melted Vaseline until well combined. Then add a few drops of the vanilla extract for a light vanilla flavor and mix well. Pour into lip balm containers, seal and allow to harden, about 20 minutes.

Makes about 8 containers of slime

If there is one party favor that is sure to be a hit with kiddos these days, it is slime. You and your kiddo can easily mix some up at home and color it to fit the theme of the party. If you want a glitzier slime, consider using glitter glue or mixing in glitter.

One 4-ounce container of glue

Mix ½ cup of the water with the glue until well combined. Add in a few drops of food coloring and mix until you are satisfied with the color (we used about 6 drops of a neon green food coloring). In a separate container, mix the borax with the other ½ cup of water until dissolved. Then slowly combine the borax with the glue mixture until a putty starts to form. You may not need to use the entire borax mixture. Knead the slime until well combined and then store in the sauce containers.