Home » latest post » FORE! Local Kids Who Have Fallen in Love with the Game of Golf 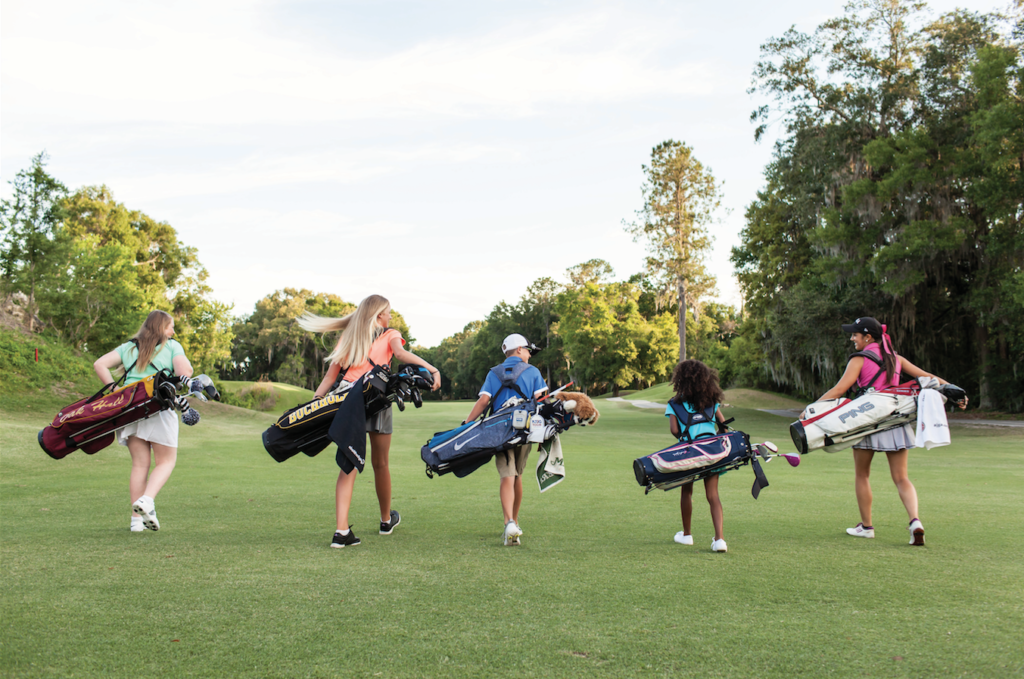 When you first think of golf, what comes to mind? Rolling hills, sand traps, clubs, visors, maybe Arnold Palmer or Tiger Woods. What about kids? Do you readily imagine them out on the course? If you are not a golfer yourself, then you might not ever think of putting your child in golf. It has often been stereotyped as a game for middle-aged men, but that is simply untrue. Many kids around Gainesville have been playing the game for years, and they are quite good!

With the wealth of sports and other activities available to your child, why consider golf? For one, unlike other more popular contact sports, golf is a game of a lifetime, said John Reger, a member of the Professional Golfers’ Association of America. You can truly play the game at any age, which may be why
it is stereotyped as a game for retirees. Also, as it is an individual game, it teaches self- reliance, perseverance, patience and honesty. “Golf is a ladies and gentlemen kind of game, so you have to treat the golf course with respect, your opponent with respect,” he said. “It’s not an out of control, trash talking kind of thing. You have to learn how to play well with others out there.”

Golf, like so many other sports, is also great for your physical health. In fact, according to a study from the British Journal of Sports Medicine, playing golf regularly can increase your life expectancy by five years. Walking from hole to hole can burn a significant number of calories and improve your cardiovascular, respiratory and metabolic health.

If you would like to get your children interested in golf, Reger recommends getting your kiddos into a program that will introduce them to golf in a fun way. One such program that Reger runs is the Drive, Chip and Putt, a free national junior golf development competition. Prior to the competition, PGA professionals like Reger will host golf clinics, and kids of any skill level, including those who have never even touched a club before, are welcome to join in. “We put a club in their hand and teach them how to hit putts and drives and chips, and get them ready for [the competition],” he said. Kids between the ages of 7 and 16 can also try out the PGA Junior League. This program provides kids with a fun, social environment where they play matches in a scramble format. And if neither of those programs seem to suit your child’s needs, he or she can also try out the Gator Junior Golf Association or the Haile Plantation Junior Golf Camp.

As far as the high starting cost associated with getting your child started in golf, Reger said that those costs can certainly be mitigated. First and foremost, he said that if you get your child involved in one of the previously mentioned programs, they often provide the clubs so you don’t have to make an investment until you learn your child really enjoys the game and wants to pursue it outside of the program. Then, there are options for purchasing a complete set of clubs. If the price tag of a new set of clubs is too high, you can always visit Play It Again Sports for a lower-priced used set. Reger also mentioned that many golf courses do not charge children under 16 with a paying adult to play. “A lot of golf courses, a lot of PGA golf professionals that run these clubs are trying to make it where it’s as least expensive as possible at the beginning for some of these kids,” he said.

If your little one’s goal is to play golf in college or even professionally, Reger recommends that you get him or her a coach. Aside from the technical aspect of learning how to swing the club and get the ball in the hole in as few strokes as possible, Reger said that there is an important mental element to coaching. “It’s the making sure that they’re practicing the right things right, making sure that the kids have somebody with a lot of experience … who knows what to be thinking about and knows what to be focused on,” he said. “It’s actually more of a mentoring and coaching thing that creates competitive golfers that are successful.”

Aside from the benefits and opportunities that golf can provide for your children, getting your little ones involved in golf can be fun for the whole family. Golf is a game that everyone can play, and family members can even caddy for their little players, up to a certain age. So, the next time you are heading out to the green, consider taking your kids along with you!

Open to the public

Mindy started playing golf at the age of 11, when she stopped competing in gymnastics. “my parents always required me to play a sport,” she said. “I’ve always been a competitive person, so i just couldn’t sit back and just not compete in golf!” she started competing in golf just one year after she started playing the game and now plays in tournaments about once a month.

in October of 2016, Mindy competed in the state tournament with her team at Buchholz High School. she missed first place by just two strokes, a move that helped her to claim the title of the sun’s Girl Golf player of the Year for the second year running. “i got to lead the school and i got a lot of recognition from it,” said Mindy. “it was so fun.”

Aside from her many wins and other accolades, Mindy’s greatest accomplishment so far has been earning a scholarship to play golf for the university of north Florida. she plans to major in education at unF, and she hopes to eventually play on the Ladies professional Golf association (LGPA) tour.

Callie started playing golf at 10 at her father’s recommendation. she still plays with her dad now, but her favorite part of golf has been meeting new people through the game. “You don’t have to be on teams, but i like meeting new people and playing against them,” she said. she just finished her first year playing for Oak hall, which has introduced her to new tournaments, including the Jill darr tournament, where she played with both Amelia Williams and Mindy Herrick.

Callie often plays golf with her dad and his friends at Quail heights country club in Lake city, Florida. One of those games in particular has stuck out in her mind — she hit her first and only hole-in-one. “I just hit it and I don’t know how,” she said. “It was a couple of years ago on super bowl Sunday.”

For now, Callie just hopes to play through high school for fun, but she’s open to any opportunities that come her way through the sport. “I’ll just see where it goes from there,” she said.

When he was just 3 years old, Ian received his first set of plastic golf clubs. From there, he began playing more and more often until he started playing competitively at age 7. “My whole family has always been into golf. My grandpa, my uncle and my dad all play golf,” said Ian. “They just have always supported me and got me into the game.”

Ian started to play for the PK Yonge High School varsity golf team when he was a sixth grader, and they won districts that year (2016). He considers this one of his top two accomplishments, with his second being the time he shot 1-under on the back nine at the Gainesville country club.

Ian practices just about every weekday from about 2:30–6:30 p.m., and he plays in tournaments almost every other weekend. “i want to continue playing for as long as i can,” he said. “College, pro, just as far as I can get.”

Mariah started golfing as a way to boost her confidence. her mother, Nadia Singer, signed
her up with the Gator Junior Golf association after she heard that they did confidence building as well as golf. “She’s really passionate about golf with her grandpa and her dad, so we figured it would be a great combination,” said Nadia. Mariah has anxiety and add, but on the course, she’s not nervous at all. In fact, her confidence with golf has started to transfer over to her performance at school, something both Nadia and mariah’s coach are very proud of.

Mariah hasn’t competed in any tournaments yet, but she does practice at least once a week at West end on Saturdays. “my goal is to play with my grandpa and my dad in a tournament,” said Mariah. “and win!”

Seven years ago, Amelia started playing golf with her family. Then at age 10 she decided to compete in her first local tournament with us Kids Golf. now she plays for the Buchholz High School girl’s golf team. in her first year playing with Buchholz, they won districts, came in second at regionals and got third in states, something Amelia is very proud of.

Although she uses Thursdays as her days to catch up on homework and studying, Amelia spends just about every other day out on the course either at Haile Plantation Golf & Country Club or Gainesville country club. “Somedays I go out with Mindy, but then others I go with my grandpa and we have little competitions,” she said.

Amelia would like to play in college, but she’s not yet sure about her golf career past that. For now, she just wants to keep meeting new people and playing the game she loves.

As soon as he learned how to walk, brandon was introduced to the game of golf. His dad was a pro golfer and he worked at many of the golf courses around Gainesville. “He figured that if he had some talent, i might have some talent, and we’re still working on it,” said Brandon.

Brandon, a rising senior at Newberry High School, has played for his school all three years he has been there and made first seat on varsity his freshman year. He was also named the sun’s boy Golf player of the Year for 2016.

He practices for at least two hours every evening in an effort to perfect his game, and he hopes to one day make it to the PGA. “In my opinion it’s the hardest sport there is, which is what keeps you coming back to it, because it’s unconquerable,” he said. “I can find peace and solitude, and it’s fun.”