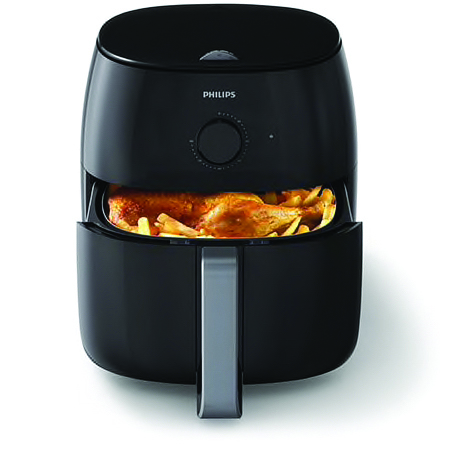 Soaring in popularity for many household kitchens are additions of the air fryer. Making them so appealing are the number of uses for this kitchen appliance! While fried foods are delicious, using a conventional oil fryer has several drawbacks such as the permeating and lingering smell throughout your house, lengthy warm-up time and difficult cleaning and upkeep. Enter air fryers! Due to it’s enclosed nature and minimal oil use, there is hardly any smell in the air during or after cooking your favorite foods; many models are ready for you to start cooking in less than a minute after turning them on; and air fryers are easy to clean and maintain. But air fryers go beyond these benefits!

Air fryers are space saving over conventional fryers because of the way their convection like operation eliminates the need for an oil basket, but rather just a cooking basket. Instead of needing a large machine that takes up an entire cabinet to itself, an air fryer can (generally) fit in a small cabinet in your kitchen corner.

Additionally, to free up more space, many air fryers go beyond just frying! A variety of popular household brands such as Black & Decker and Phillips allow you to use your fryer in a multitude of ways to fry, grill, roast, or even bake foods using your favorite recipes or new, air fryer specific recipes. But how do air fryers create a variety of scrumptious foods when they’re marketed as fryers and not something like a slow cooker?

The method utilized by air fryers is similar to convection ovens in that instead of the air remaining still in the space, there are fans that are used to circulate the air throughout the machine that allows for a more even method of cooking. By adding a small amount of oil to the basket, food will gain a light brown crisp on the outside while having a moist and flavorful inside by swirling the air with oil. While air fryers are convenient due to it’s small stature and many uses, there are also health benefits of using an air fryer over a conventional oil fryer.

But that doesn’t mean you can start frying everything! While air frying is a much healthier alternative to oil frying, it is still frying food. If you’re looking to maintain or start a healthy lifestyle, raw foods, such as a plain baked potato, are going to be far healthier than frying. If you’re looking to splurge though, get the taste and texture with far fewer calories and bad fats from air frying rather than oil frying your food!