Home » latest post » Guess What I Heard? How to Quell Gossip in Children 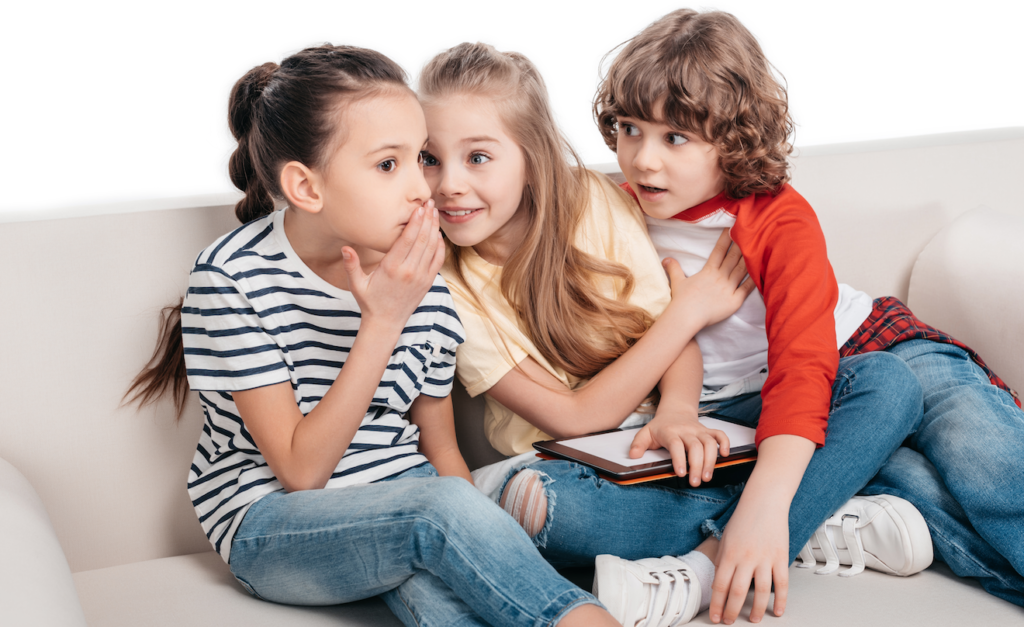 Remember the telephone game? The one often played in groups as an ice breaker where one person whispers something in the ear of the person next to them and then that persons whispers it in the ear of the person next to them and so on until the last one in line says aloud what they heard. What the last person hears is a far cry from the original message. The point of the game is to illustrate just how distorted facts become as they are repeated from person to person. Even my first grader finds this game hilarious because she knows the last participant is going to say something ridiculous. My hope, though, is that she is getting the bigger message. This is exactly how gossip in children works. The game is fun and harmless, but in the real world, things said get repeated and not always in the way we intended.

Gossip is defined as casual or unconstrained conversation or reports about other people, typically involving details that are not confirmed as being true. KidsHealth.org simplifies it by saying, when we talk to or have conversations with people we share our thoughts, ideas and feelings. However, when we say mean things, tell stories that you are not sure are true, or reveal information you know is supposed to remain private, you are spreading gossip; and that is when it becomes an issue. This is an important distinction to not only teach our children at a young age, but also to ensure we are modeling the same behavior. If we are engaging in gossip, repeating things we hear to others in front of our children, you can be sure they will do the same.

Gossip can be harmful. According to a study focused on students between the ages of 5 and 11 published in the Journal of Educational Psychology, children who are rejected by their peers through damaging gossip are more likely to suffer academically. Girls are the most likely to be negatively affected by this form of social aggression and suffer from lowered self-esteem, but it can affect boys, too.

A popular technique to teach a child about gossip is to squeeze the toothpaste out of a tube then ask them to put it back in the tube. When they realize that it cannot be done, the lesson can be made that the toothpaste is like unkind words (or actions) — once said they cannot be taken back.

Samantha Bell, mom of two and a VPK Teacher at First Christian Academy has been working in childcare for close to 20 years. Her advice for stopping gossip in its tracks is her belief in the Golden Rule: treat people the way you want to be treated. At home she said anytime her teen repeats something that could be gossip she asks these questions: 1. Is this directly from the person’s mouth? 2. If so, do they want you sharing it? 3. Would you want someone saying this about you? In her classroom of younger children, Bell said her go-to is to simply ask the child if what they are talking about has anything to do with them. If it does not, then they should walk away. To simplify this during class time she uses a technique she learned from her mother (also a preschool teacher) by touching the top of her nose, which means “mind your business.” This means the children know to walk away without her having to actually say anything to them. The less attention that the gossip gets the better.

Michele Masson, RN, mom of two elementary-age girls echoes this same lesson. She said she talks with her girls about how badly they feel when others talk about or say mean things about them. By explaining that that is how others feel when they are talked about helps them to understand why they should not repeat what they hear and fuel the gossip. Masson also tells her girls to speak up when they hear gossip by telling the person spreading it that it is not nice to do so.

3 Grandparents Day Gifts That They Will Love

How To Create A Healthy Home Environment

Is My Child Sleeping Enough?

Should You Be Worried About Your Child’s Attachment To A Toy?