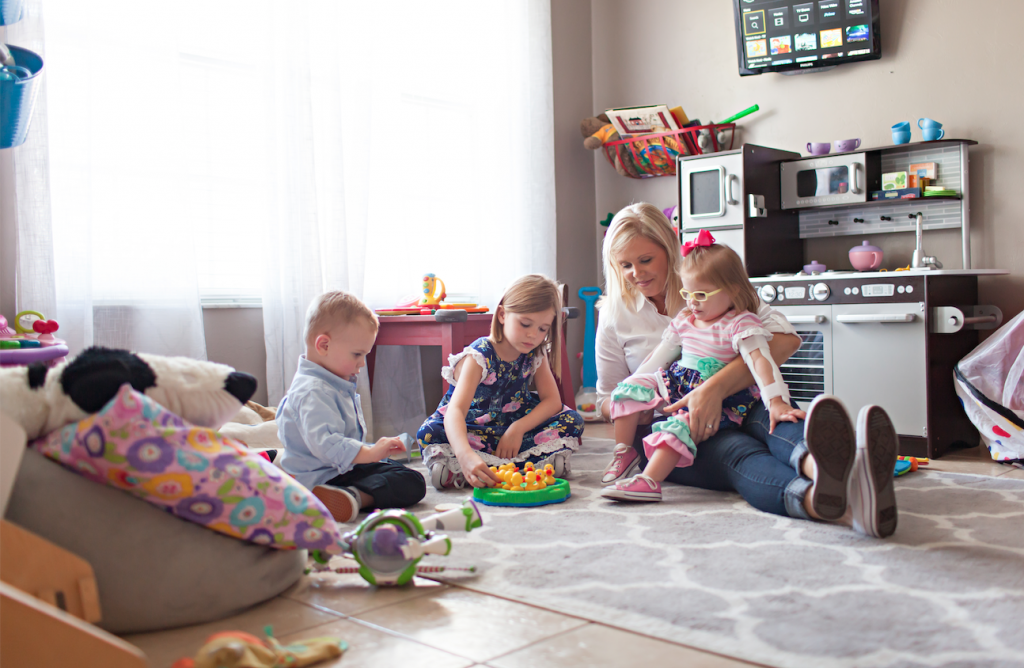 By Leslie Youmans | Photos by Shandon Smith with Lifeprints Photography

On Aug. 16, 2013 we welcomed our Harper Jean into the world. At just 5 pounds, 10 ounces and 18 inches long, she was tiny but perfect! She quickly earned the nickname “Harper Bean” or just “The Bean” for her small size. She was welcomed into our combined family that now consists of four children, my husband, Jeff, and myself. We have my 16-year-old stepson Jeffrey, my 7-year-old spunky Hayden Grace, our Harper (who is now 4) and our 2-year-old baby boy, Emmett.

We were able to go home just 24 hours after Harper’s birth. She was an easy baby. She rolled over on time, laughed and cooed and was such a joy. Life was good.

The start of symptoms

At 6–7 months old, I started noticing some alarming things with Harper. Her eyes started crossing, she lost the ability to sit up well on her own, and she had many bouts of reflux, ear infections and pneumonia. Her muscles were weakening. Our baby was no longer strong and happy. Around 9 months of age I reached out to her pediatrician and he ordered some tests, which all came back normal. By 12 months she still was not crawling or walking and she did not sleep well. She was, however, able to clap and feed herself her birthday cake. Due to all of the delays she was experiencing she started physical and occupational therapy in hopes of helping her catch up to normal development for her age. We were elated when she started crawling around 13 months old.

Emmett was born when Harper was 15 months old. Although she was fussy, still not sleeping through the night and continuing to lose muscle tone, she was intrigued by him and would say “Em…mettttt.” It was precious! She also said “Hay…den,” “bye,” “mommy,” “daddy” and “baaaaaby.” She even tried to copy me when I told her I loved her.
Then, around 18 months Harper became miserable and inconsolable. She would cry hours, sometimes days, at a time. This meant no sleep — for any of us. There were many trips to the emergency room where we returned home feeling helpless as the doctors could not determine the source of her crying. She stopped talking and became increasingly lethargic. She started not being able to control her hands well and began mouthing them nonstop. This was the hardest phase. Not being able to console her for days at a time and being afraid of what I would find when I peeked into her crib was terrifying. It took a toll on all of us.
We saw countless doctors and specialists. We were exhausted and distraught. A basic chromosome test turned up nothing. Fragile X (a genetic condition that causes intellectual disability as well as behavioral and learning issues) testing was negative. All of the doctors remained clueless.

Finally, on Oct. 30, 2016, after almost two years of waiting, we received the answer to the mystery surrounding Harper’s health problems — it was devastating. She was diagnosed with a genetic mutation of the MECP2 gene. Harper has Rett Syndrome.

According to Rett Syndrome Research Trust, Rett Syndrome is a serious lifelong neurological disorder diagnosed almost exclusively in girls. Many children with Rett are unable to speak, walk or use their hands, and they often need feeding tubes. Common issues associated with Rett Syndrome are seizures, anxiety, and gastrointestinal, breathing and orthopedic problems.
Currently, Harper does not walk without the use of a gait trainer. She occasionally says a few words, but she is unable to express her wants and needs effectively. We have been working diligently to obtain a device that will allow her to communicate with us by using only her eyes. She crawls very slowly and has very little purposeful use of her hands as it is hard for her to control them. She requires the use of custom arm splints to keep her from mouthing her hands.

There really is no major body system that Rett does not affect. Harper sees many different specialists with UF Health, including specialists in gastroenterology, cardiology, ophthalmology, orthopedics and most recently neurology. She also has a rigorous therapy schedule, to which we hope to add equine and aqua therapy as it benefits so many children with Rett.
Harper loves attending school at Newberry Elementary, but we often have to pick her up early for therapy appointments or visits to her specialists. She has been sick with upper respiratory symptoms more often than not.

Looking toward the future

In January of 2017 we traveled to Atlanta to meet neurologist and Rett Syndrome specialist Dr. Daniel Tarquinio. Currently, there are no Rett specialists in Florida. Dr. Tarquinio was able to provide us with a better picture of Harper’s specific gene mutation. He informed us that Harper’s specific mutation has NEVER been recorded and is completely unique to her. There truly is no one in the world who compares to her and he nicknamed her “his unicorn.”

Harper appears to no longer be in the destructive phase of “regression.” We are hopeful that the disease stops ravaging her body and robbing her of her abilities. Going forward we will continue to follow up with her team of specialists to make sure she does not develop more trademarks of Rett.

We hope to inspire other families to remain positive even when the situations in life you have been given seem so unfair. We choose happiness and joy. We choose to live life to the fullest and provide Harper with all the opportunities we can. Our sweet Harper “Bean” has the sweetest smile, the most adorable evil-ish laugh and is feisty and sassy as all get out. She is a serious fan of “Toy Story” and those little yellow Minions make her giggle like nothing else. She is a fighter. She is tiny, but she most certainly is fierce.

Since Harper was diagnosed last year our youngest, Emmett, has been seen by the Early Steps program as well as a developmental specialist. He is developmentally delayed in many areas, including speech. The specialist is concerned that Emmett may be on the autism spectrum. We will return to the specialist after Emmett has had six months of therapy as well as time in preschool. He will join his sister in the ESE program at Newberry Elementary when he turns 3 in November. Emmett, as of August, has begun speech and occupational therapy, bringing our total therapy visits to 10 per week.

Hayden, our 7-year-old has had a lot of growing up to do at a young age. She has been exposed to many things that most children of her age do not experience. However, we feel that she has gained personality traits that many individuals never acquire. She is one of the most strong and empathetic people (adults included!) I have ever known. We work hard on giving her one on one time. Her teacher last year participated in a “buddy reading” program in which Hayden’s first-grade class would pair up with a child from Harper’s pre-K class and read to them. Both of the girls loved it. She currently participates in gymnastics and has also recently joined Girl Scouts.