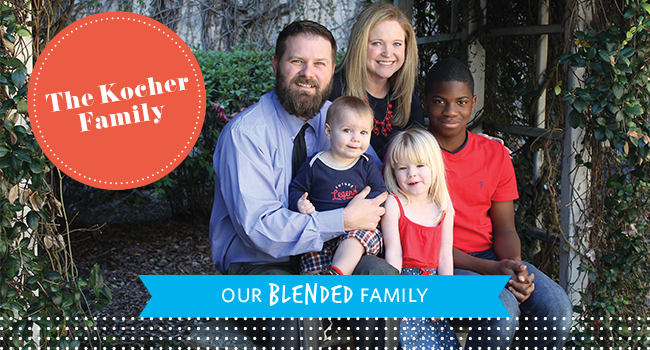 Our Blended Family: The Kocher Family

Like many other new couples, Gary and Brianne went on their first date to get to know a little more about each other. Unlike many, this meant talking about fostering children in the future. Gary had taken care of a non-biological daughter before dating Brianne and was interested in fostering. Brianne was unsure of children of her own, but liked the thought of fostering as well. Fast-forward to 2014 when Gary and Brianne married and their first step as a married couple was beginning fostering classes in the Orlando area.

However, Gary went through a career change and the couple felt it was the wrong time to begin fostering children. But they would not feel this way for long. Brianne got pregnant with their daughter, Abigail, and the two decided to move to Alachua, Florida to be close to family. Once settled in, they began attending First Baptist Church High Springs where they met several families who fostered. Having found a community of people following what they felt they had been called to do sealed the deal on fostering for the couple.

Since 2016, the Kocher’s have fostered 11 children, with six permanent placements (meaning the children will remain in the foster care system until adulthood). Beyond being able to help displaced children, Gary and Brianne have felt they have gained significantly from the experience. “Through fostering, we have met some amazing people, amazing kids and have learned about amazing programs most people don’t even know about,” Gary said. For Brianne, the way her family has grown and come together has been incredible. “It’s been a wonderful blessing to us all,” she said. “Abigail has blossomed over the last year, built confidence in herself and Gary and I [are] closer together because we truly have to rely on each other to make our daily lives flow well.”

The Kocher family now includes Damon (12), their foster son; Abigail (4), their biological daughter, and Shane (15 months), their adopted son whom they met through the fostering program when he was just 7 weeks old. While there were some concerns on how Abigail would adjust to suddenly having a house full of siblings, Gary and Brianne have been pleased with just how well their children all get along. Damon, Abigail and Shane have a deep love for one another, and they have loved the different children that have been temporarily placed with the family. “Children are full of love and through hard times that love comes out in full force,” Gary said.

Gary and Brianne have had such a wonderful experience fostering children and they highly recommend it to other families considering it. “Just do it!” Brianne said. “It seems scary while preparing and going through the classes, but ultimately it’s so rewarding when you get your first placement.” Fostering certainly comes with hardships, but the Kocher’s have not let that stop them in their goal to provide children in need with a loving family able to care for them.