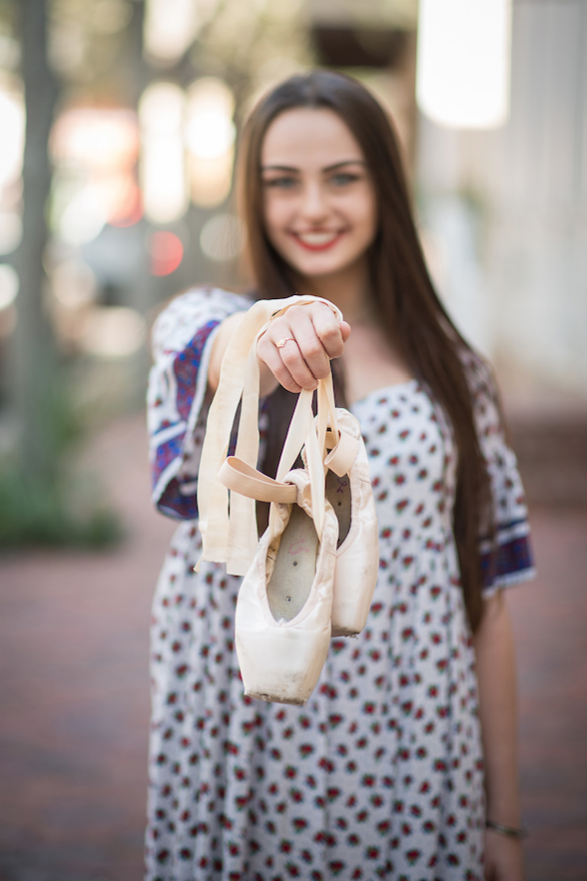 When she was a child, Grace Parent used to walk around the house in her mom’s old pointe shoes. Then, when she got her first pair of her own, she was so happy that she wore them to sleep that night.

“I could live in my pointe shoes,” said Parent.

And as this year’s Cinderella for Danscompany of Gainesville’s annual production of “Cinderella,” Parent basically has for the past seven months.

As soon as she learned that she was selected as Cinderella 2016 back in May, Parent began coming in to the studio every day to learn the part. Each Cinderella has to teach herself  the choreography by watching videos of Danscompany’s past performances, and Parent wasted no time in getting started.

“I was in there the next day practicing,” said Parent.

For Parent, a 17-year-old senior dual enrolled in Buccholz High School and Santa Fe College, the role of Cinderella has been a dream for quite some time. In fact, it was a performance of Cinderella that she saw at age 10 that inspired her to return to dance after six years away from the studio taking gymnastics lessons. Since then, Parent has performed in five performances of Cinderella, with this upcoming performance as her sixth and final.

There was no formal audition for the role. Instead, Nina Cameron, artistic director of The Danscompany, considers a dancer’s entire time at Danscompany and her personality when envisioning who will be the next year’s Cinderella.

“It’s not just the best dancer,” said Tobi Potapow, president of Danscompany. “It’s the one who embodies Cinderella.”

And the role really is about so much more than just technique. To be Cinderella, you must have excellent time management skills and a great attitude.

“When you have school and work, it can be stressful,” said Parent, who balances three jobs on top of school and 20 hours a week of dance practice.

Aside from the numerous weeks spent practicing for the performance, Parent has spent a lot of time interacting with children who look up to her as Cinderella, both in and out of the studio.

As Cinderella 2016, Parent read the story of Cinderella to students at Idylwild Elementary School. She used the story as lesson to teach the students that, even though people may tell you “no,” you can still achieve your dreams if you believe.

And Parent has a lot of admirers at the studio, too. After her own practices are done on Sundays, she stays the rest of the day to watch and interact with the younger dancers. While others may find it a burden to spend their free time watching younger dancers, Parent considers it a privilege, especially because she always wanted to interact with Cinderella when she was younger.

“I consider every single dancer there as a sister or a brother to me and I would set aside my whole life to help any of them out because I know they would do the same for me,” said Parent.

This love of children has been a formative part of Parent’s life. She has been babysitting since the age of 14 and she hopes to attend Florida State University next year to become a pediatrician.

Although she does not plan on pursuing a degree in dance, Parent does hope to continue dancing with the Golden Girls dance team at FSU. That, along with the role of Dorothy in Danscompany’s spring production of “The Wiz” are her next two dance goals.

Seven years of dance practices and seven months of extra practices, performances and community outreach will culminate on Dec. 3, 2016. Parent will dance in two performances of “Cinderella,” and then her time in the role will be over.

“It just goes so quickly,” said Parent. “You want to stop and take time to enjoy, but you don’t have the time.”

Although the curtains will close on this year’s performance, Parent said that she will always reflect fondly on her time as Cinderella 2016.

“I’ve enjoyed every moment of it,” she said.