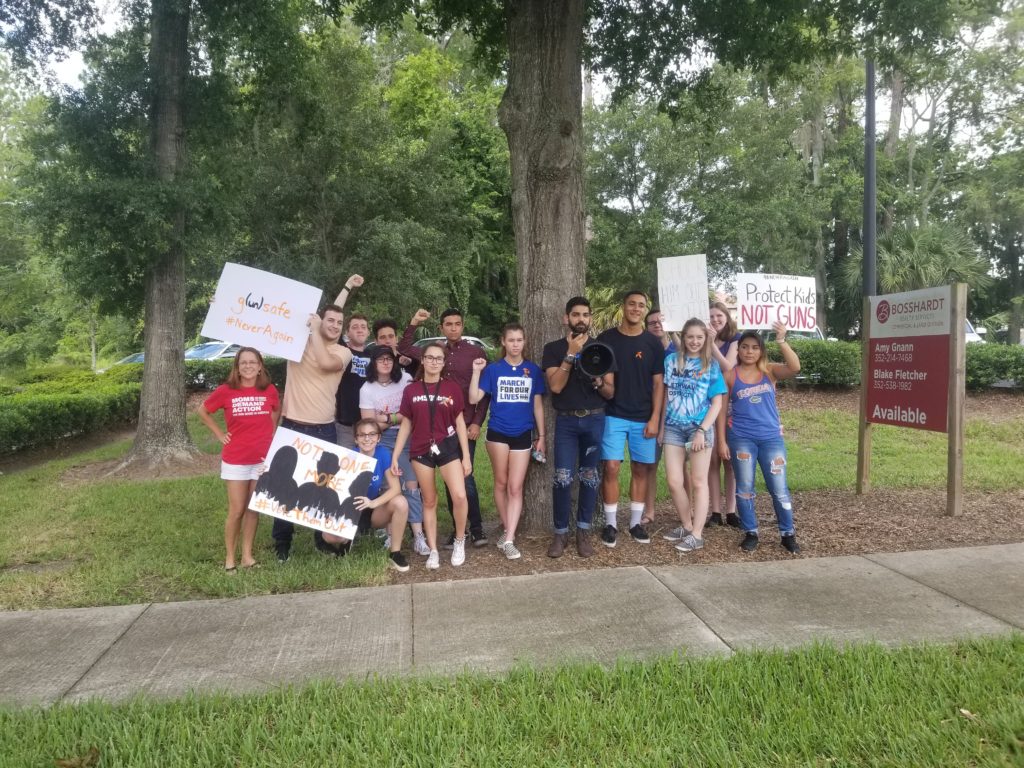 Today a group of approximately two dozen individuals gathered outside of Representative Chuck Clemons’ (R) office in Newberry, Florida to protest gun laws in the United States. This was a particularly impassioned group of individuals as many of the attendees were or are students of Marjory Stoneman Douglas (MSD) High School where a shooting on February 14 claimed the lives of 17 individuals. Representative Clemons gave a brief interview about the protest, plans for safety and legislation Florida is working on in response to the Marjory Stoneman Douglas (MSD) high school shooting. After completing the interview, he invited individuals in, one at a time, to meet with him for one-on-one discussions about gun safety.

I spoke with Amol Jethwani (D), current third year University of Florida student and Political Director of the UF College Democrats organization, who is running against Representative Clemons in the race. Amol hopes that in the wake of this shooting, politicians can realize this is a pressing concern and is lobbying to keep guns off of campuses.

Current MSD student Ryan Servaites said he has been passionate about politics from a young age but gun laws were not the focus of his passion, until the MSD shooting. Since that day, Ryan has been an outspoken voice in the fight against guns and that, “the incident showed how immediate it is, it’s happening now” and that there shouldn’t be anyone else who has to go through what these students and families have gone through. He echoed many sentiments in that legislation is too slow and only comes about after a tragedy like this and that he wants legislation to be ahead of incidents like the MSD shooting.

The protestors gathered calmly, a few armed with signs, to peacefully protest Representative Chuck Clemons and show how they are passionate about gun safety and hopeful for future change. While the main focus of today was advocating gun laws and regulation, every individual spoke about one important thing: voting.

Many individuals stressed how important it is for individuals to vote, whether they are on their side or on the other side, and that voting is the greatest right we have as individuals in this country.