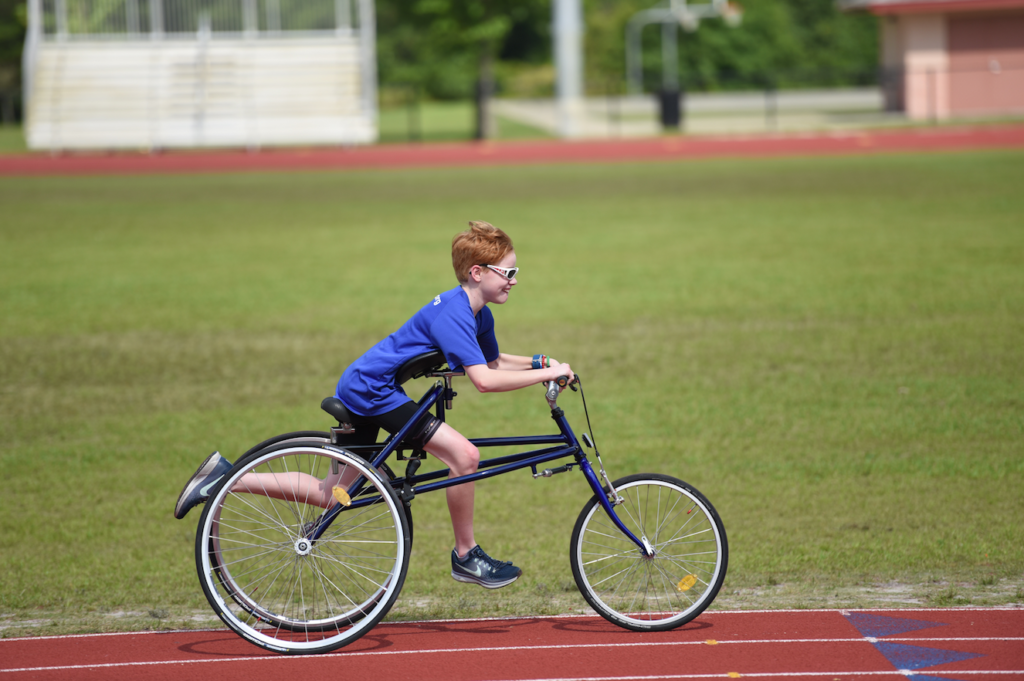 In honor of Global Running Day, we want to share a past story about an exceptional young lady who brings a new meaning to running the good race.

When most kids get to work on their birthday or Christmas lists, video games, toys and clothes tend to be the priority. Sayers Grooms is not like most kids, though. Instead, she asked her parents for a nonprofit.

Sayers was born with ataxic cerebral palsy, the rarest form of the disorder, which affects the part of the brain that controls movement and coordination, resulting in instability as she performs voluntary movements such as walking as well as her speech.

Despite her mobility issues, Sayers has always been an athlete at heart. “She’s always wanted to do sports, she wanted to do everything her sister was doing,” her mother, Dr. Mary Grooms, said. She started taekwondo at age 5, but Sayers was also interested in running and grew frustrated that she could not move as quickly as her peers. At the age of 7, she told her mother that she wanted to find a sport that she could eventually compete in at the Paralympics.

After searching online for different options for Sayers to pursue, Mary found RaceRunning, a track and field sport in which the athletes use RaceRunners (three-wheeled bike with no pedals) to support them as they run. After facing some difficulty finding a RaceRunner (there were only about two manufacturers at the time, neither in the U.S.A.), Mary heard back from Connie Hansen in Denmark, one of the two inventors of the sport. Mary sent Connie some videos of Sayers walking and running along with her measurements, and they received their order of a red RaceRunner right before Sayers’ 8th birthday. Not only did using a RaceRunner take away the issues of balance and coordination, allowing Sayers to really run, but it also gave her the exposure to how her body should feel while running, which has helped her to run better on her own as well. “I felt free for the first time,” said Sayers.

For about the first year after receiving her RaceRunner, Sayers’ main interest in the sport was recreational. But upon learning about the annual RaceRunners Camp and Cup in Denmark, her focus took on a more competitive nature. They attended the camp for the first time when Sayers was 9, and have attended every year since. In the past the camp has played host to as many as 94 athletes from 13 different countries around the world. The first four days of the week-long experience are dedicated to the camp portion, where participants train with their RaceRunners twice a day, and the final three days are dedicated to competing. “I like competition better because I get to hang out with my friends more and also get to test my times from the last year,” said Sayers.

Throughout her years of competing in RaceRunning, Sayers has grown to be one of the fastest female RaceRunners in the world. In fact, this coming August, Sayers will be competing in the CP World Games in Barcelona, an event that only happens once every three years. Although they do not typically allow athletes under the age of 14, they made a special exception for her due to her fast race times.

Through all of this, Sayers could not believe that other kids with mobility issue like her did not know about or have access to the sport. In fact, when she attends the annual RaceRunners Camp and Cup, she is usually the only participant from America. “From the first moment that she got on this RaceRunner, as much as she loved it, she couldn’t believe that no one else in our country knew about it,” said Mary. “She said to me multiple times, ‘Mom, we have to figure out a way for other people to figure out about this sport.’ … She wants to share it with as many people as she can.” After years of asking to start a nonprofit, Mary and her husband, Greg, decided to move forward with Sayers’ dream and started WatchMeRun around Christmas in 2016. The fundraising efforts for the nonprofit were launched in May 2017, and so far the organization has raised $15,000, which will eventually go toward the purchase of RaceRunners for interested individuals. “The difficulty we’re running into is finding individuals who want to run,” said Mary. “We’re still trying to figure out the logistics of some of this stuff, but we’re very dedicated to using all funds raised to go directly toward putting a RaceRunner in the hands of a capable, motivated individual who is hopefully going to use it a lot.”

So far, they have donated one of Sayers’ old RaceRunners to one local boy, and there are at least two other children who have expressed an interest in trying one out for themselves. Through WatchMeRun, the Grooms’ have held a few Come and Try events with a few different sizes of RaceRunners available to test, and they will be holding another event for interested parties on June 3 from 3–5 p.m. at Santa Fe Track. If you are interested in learning more about what WatchMeRun does or would like to donate to Sayers’ endeavors, visit Watchmerun.org.