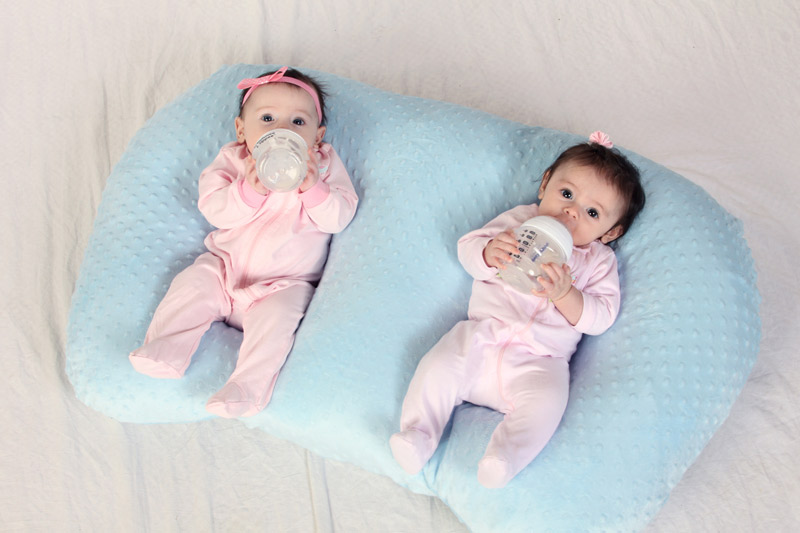 Yes, you saw that right! There are two babies in your growing belly, and there is no turning back!

So, after the initial shock and excitement wears off and the reality of bringing two bundles of joy home starts to sink in, you start searching the web and libraries for anything and everything you can get your hands on about having twins!

Well, search no further! Those with first-hand experience, moms with twins, share their wisdom and what they have learned during their great journey with twins! So, sit back, prop those feet up and take it all in; you got this!

Fraternal twins are twins who developed from two different eggs fertilized by two different sperm cells, while identical twins develop from a single fertilized egg that split, meaning they have the same DNA. While fraternal twins generally look as similar to each other as any other siblings, identical twins tend to look extremely similar. However, this can vary due to environmental factors.

Singleton: Your “single” child that came before or after a set of twins.

IVF (In Vitro Fertilization): Process of fertilization done by manually combining an egg and sperm in a laboratory dish, and then transferring the embryo to the uterus.

IUI (Intrauterine Insemination): The practice of placing sperm inside a woman’s uterus to increase the chances of the sperm reaching the fallopian tubes.

Baby A, Baby B: The terminology/labeling used by the doctors to tell which twin is lower in the uterus. Baby A is alway the presenting baby (the one closest to the cervix) and the other one is Baby B.

Perinatologist: An obstetrician who has special training in managing patients with high-risk pregnancies or complications during pregnancy.

Tandem Feeding: The logistics of nursing two babies at the same time. Talk to your lactation consultant for help.

Best advice for other twin mommies:

“Get them on schedule right away. Feed one, feed both!”

“Prepare for a NICU stay [and] tons of monitoring during your pregnancy.”

“Having a few ‘stations’ around the house of swing(s), bouncer(s), Bumbo(s), etc. helps manage two babies at once.”

What has been the best thing about having twins?

“Having a best friend for your kid from the start. Leaving daycare and school is easier because they have each other.”

“Seeing them play with and smile at each other!”

“They will have a lifetime bond.”

“Twice the snuggles, [and] twice the hugs and kisses.”