Home » latest post » How Do You Pick The Right Turkey? 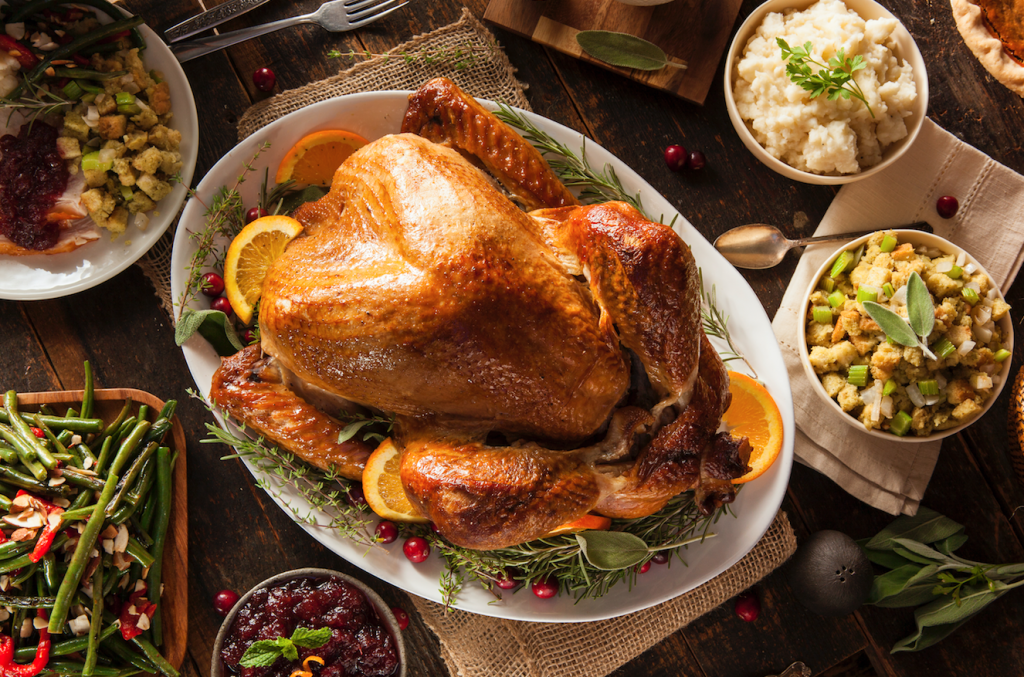 There is a plethora of options when choosing a turkey for Thanksgiving dinner. Not only do you have to decide how you will cook it, you have to consider the size, freshness, ingredients and how the turkey was raised in order to serve up a truly delicious Thanksgiving meal. To help you pick the right turkey, we cooked up this turkey guide for both budding and experienced turkey chefs alike!

It can be hard to gauge the right turkey to get for the amount of people you are feeding. A good rule of thumb is to have a pound of turkey (with the bones still in) for every person being fed. If you desire leftovers, up the weight to the equivalent of one and a half pounds per person. If you cannot find a turkey large enough, you can always buy two turkeys, cook them both, and have one for Thanksgiving dinner and the other for leftovers. Two separate turkeys will be quicker to thaw (if you buy frozen) than one large one and easier to maneuver when cooking.

A fresh turkey is one that has never been frozen under 26 degrees. These turkeys should be bought one to two days before cooking. Bill Finnegan, a local butcher at the Williston Plaza Publix, said that fresh turkeys can be more expensive by $1.50/per pound, but they are often characterized as having a richer flavor. However, it can be a mad dash to get a fresh turkey a few days before your Thanksgiving feast. If you want a fresh turkey, call your local supermarket several weeks in advance to reserve your turkey. Or, you can save yourself some stress and get a frozen turkey a few weeks (or months) in advance of Thanksgiving. Frozen turkeys can last in your freezer for up to an entire year, but cooking them within two to three months will yield the best results. Bill said that he personally buys a frozen turkey and cooks it in an oven bag to ensure that the turkey stays moist throughout the cooking process.

A frozen turkey should be defrosted in the refrigerator before roasting. Leave it in its original packaging, put it in the fridge (preferably on a tray to limit the mess as it defrosts) and keep the turkey in the fridge for 24 hours per every four to five pounds of turkey, according to Foodsafety.gov. So, for example, if you have a 20-pound turkey, you should leave it in the fridge for a total of four days to defrost.

Pastured turkeys are like the upgraded version of free-range turkey. These turkeys are allowed outdoors for most of their lives and are able to roam about and forage for food. They are free of antibiotics and hormones, and their flavor is regarded as better than turkey that was raised indoors.

These turkeys have been injected with either broth, butter, a saline solution, chicken fat, or a mixture of all four. The texture of these turkeys is often spongy and moist. However, due to the other flavors inside, some say that the actual turkey flavor is minimal.

An organic turkey, by USDA standard, has to be raised on organic feed alone, given access to the outdoors (making them free-range as well) and are not allowed any antibiotics.

A natural turkey contains no artificial ingredients or color. It is also minimally processed, but the “natural” label does not make reference to how it was raised.

Kosher turkeys are raised and processed with rabbinical supervision and in alignment with Jewish dietary laws.

These turkeys are directly descended from the first domesticated turkeys in America. They are the most expensive of all the varieties of turkey and have to be special ordered. These birds are typically smaller and leaner, since they are not commercialized like the majority of turkeys. They also have more dark meat than their commercial counterparts.

Now that you have a better understanding of your turkey options, go out and pick the right turkey to make something delicious this year for your family!