Home » latest post » What To Do When Your Kiddo Has Pinworms 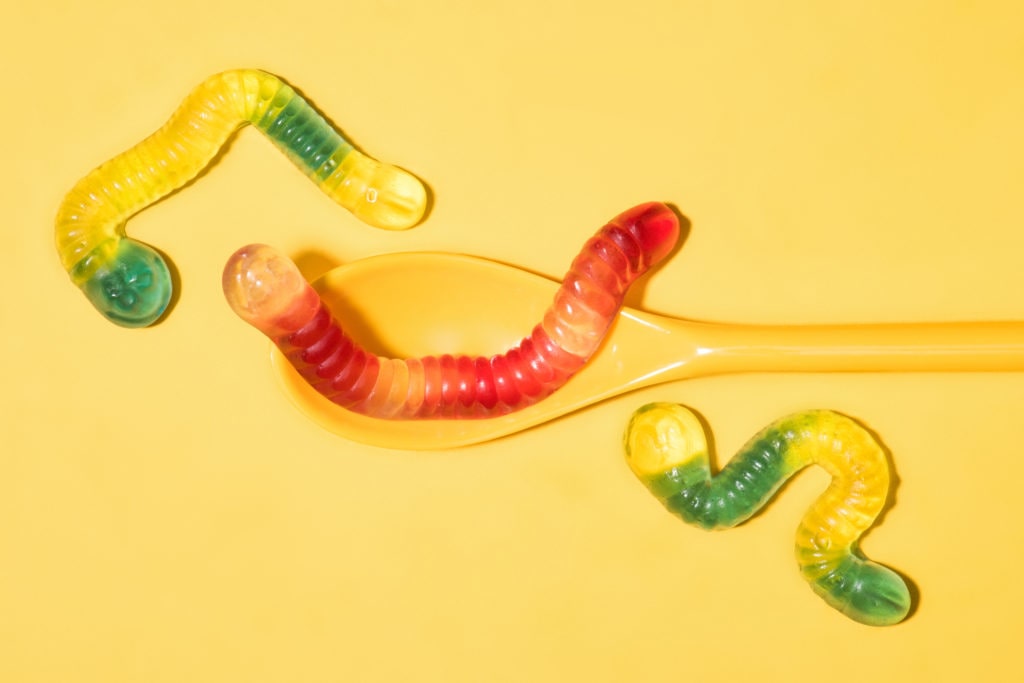 “You’ll get worms!” Is this just something moms like to use as a scare tactic, or is it something to really be concerned about? My mom swears she used to buy sterilized sand for my sandbox when I was a kid because she was afraid I would eat it and get worms. Was this necessary or an old wives tale?

According to the Mayo Clinic, a pinworm infection is the most common type of intestinal infection in the United States and are most common in children ages 5-10. Pinworms are described as being thin, white and up to a 1/2 inch in length. Here is the real scary sounding part: the eggs hatch in the intestinal area of whomever has ingested them where they will live in the colon. From there the mature female worms lay their eggs in the anal area of the new host. These eggs can cause itching (sometimes extreme) around the anus, which often results in scratching. The cycle begins. The scratching can lead to the eggs becoming stuck under the fingernails where they are transferred to other surfaces or people. Pinworms are caused by accidentally swallowing or breathing in the eggs of the pinworms. The eggs are microscopic so they cannot be seen with the naked eye. They can be found on contaminated surfaces for two to three WEEKS and can be transferred from surface to surface, from person to person or from food, drink, bedding, stuffed animals, clothing, etc.

Dr. Sarah Wittstruck, a pediatrician with the Palms Medical Group in Gainesville said she sees pinworms in her practice about once a month. “It is fairly common and usually treated with an OTC (over the counter) medication.” The OTC medicine is called pyrantel pamoate, available in the United States under the brand names Pin-X and Reese’s Pinworm Medicine. Her best advice to prevent it is to wash hands and fingernails after playing outside, using the toilet and before eating.

Healthychildren.org explains that the worms may be seen around the anus and are especially active at night or early morning. This is why Wittstruck also said it is true that using a piece of scotch tape in the dark over the anus can help to definitively diagnose pinworms. Pinworms also wiggle, if in doubt, when trying to diagnose.

What happens after the diagnosis?

As Wittstruck said, it is usually treated by an OTC medication. Be sure to follow all directions by making sure the repeat dose is given two weeks after the initial dose. This is because the eggs can live for one to two weeks. Since there is a risk others can be infected, family members (especially anyone who sleeps with the infected person) should also be treated if showing symptoms. It shouldn’t be necessary for the infected child to miss school, and the itching should subside within five to seven days. If symptoms persist or get worse, call your doctor. Washing bedding, pajamas, underwear and towels in hot water is also recommended in ensuring the eggs are all gone.

A pinworm infection is the most common type of intestinal infection in the United States.

In the end, all worms are not the same. Pets do not carry pinworms and Wittstruck assured me that it’s not actually pinworms that would be found in the sandbox like my mom was worried about. Worms that are found in the dirt are hookworms, so she wasn’t wrong to be concerned. Like the prevention of many childhood illnesses, washing hands is the best prevention! If symptoms have persisted or gotten worse, or if you or your child have anal pain, abdominal pain, blood in stool or rectal bleeding, seek medical care immediately at your pediatrician, doctor or emergency room.

*Please reach out to your doctor with any and all questions about pinworms.