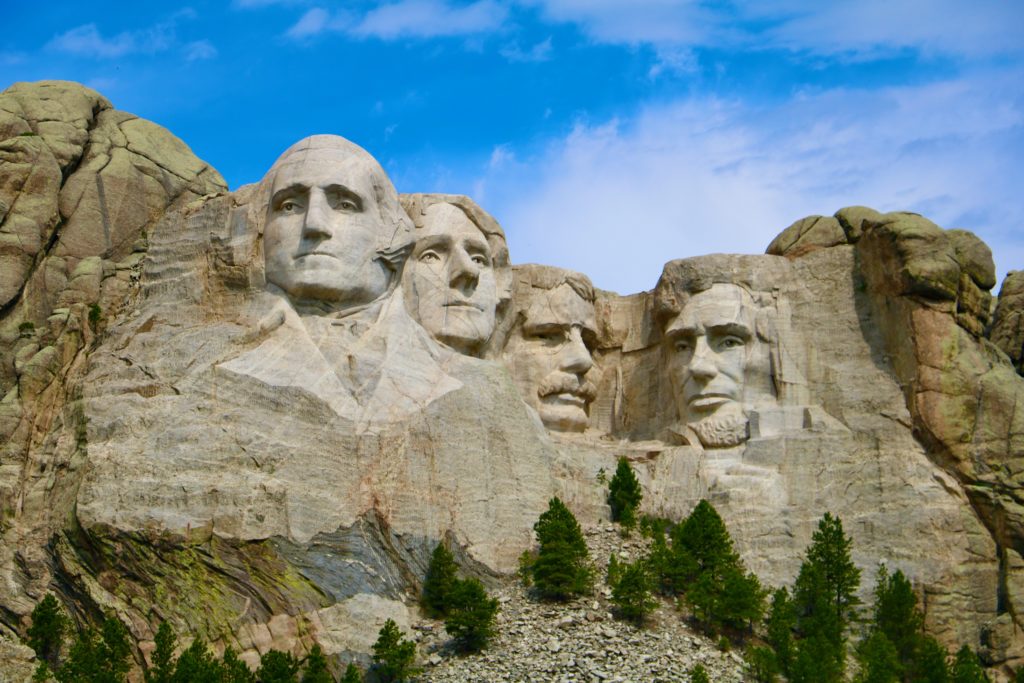 These figures transcend past their terms and impact most American lives, whether that be in a history classroom or when listening to a press release on the news.

Stay tuned to learn a little bit more about the presidents that shaped the United States today!

George Washington fell for his best friend George Fairfax’s wife Sally and wrote her a sweet letter. She was his first love apparently and taught him to be less awkward, according to the History Channel.

John Adams and Abigail Adams wrote 1,160 letters to each other throughout their marriage. In the letters, John and Abigail discussed military tactics and politics, indicating an equal, loving relationship, according to the Smithsonian Magazine.

4. James Madison finished his degree in 2 years instead of 4.

James Madison became Princeton University’s first graduate student in the 1770s. He studied Hebrew, law and Greek and Roman philosophy, according to the History Channel.

5. James Monroe died on the Fourth of July.

Not only did Thomas Jefferson and John Adams die on July 4, but James Monroe did too. All three men were founding fathers who were also elected to become presidents.

6. Despite serving as president,  John Quincy Adams was a dancer at heart.

Because his dad couldn’t dance, John Quincy Adams made it his life mission to dance well. He studied it in Europe and attended dances regularly, according to the New England Historical Society.

Today, the $20 bill features Andrew Jackson’s face. Yet, during his time as president, he opposed paper money and shut down the Second Bank of the United States, according to the History Channel. It makes you wonder if he’d feel flattered or angry.

8. Martin Van Buren was unmarried during his presidency.

After his childhood sweetheart and wife Hannah Van Buren died, Martin Van Buren stayed single and never remarried. As a result, he was one of a few presidents to not have a spouse during his presidency, according to the History Channel.

9. William Henry Harrison was the first president to die in office.

In 1841, William Henry Harrison died 32 days into his presidency after contracting a cold. He is known for serving the shortest presidential term, according to the White House.

Because William Henry Harrison died in office, John Tyler became the first vice president to take on the president’s role, according to the White House. He’s most known for succeeding his predecessor and becoming president without winning an election.

11. This president wanted to serve one-term instead of two.

James K. Polk wanted to serve for one term. And he followed through on his promise, but only after working 12-hour days and refusing to delegate responsibilities, according to Robert W. Johannsen at a Hayes Museum lecture.

12. Zachary Taylor became the second president to die in office.

Zachary Taylor died of gastroenteritis because he only ate cherries, fresh milk and raw vegetables. Those foods together created a very acidic environment in his stomach, causing him to die, according to the History Channel.

13. Millard Fillmore tried to put out a fire at the Library of Congress.

Millard Fillmore loved books and carried the dictionary with him everywhere he went. As a result, he and his wife founded the first White House library, which later caught on fire, according to the History Channel. He, of course, tried to put it out as an avid reader.

Franklin Pierce became the first president to memorize his inaugural address. He recited 3,329 words without using any notes, according to Medium. That’s quite the flex.

15. James Buchanan was a lifelong bachelor.

No, James Buchanan didn’t give anyone a final rose. In fact, he stayed single his whole life, becoming the only president to do so, according to the White House.

Abraham Lincoln wasn’t a UFC fighter but he did receive an “Outstanding American” honor in the National Wrestling Hall of Fame, according to the History Channel.

17. Andrew Johnson was the first president to be impeached.

Andrew Johnson was impeached because he removed the secretary of state, going against Congress, according to the History Channel. As a result, Congress felt he overused his power and impeached him — yikes.

Not only was his name not Ulysses, but the “S” stood for nothing. His actual name was Hiram Ulysses Grant, but someone typed his name wrong on a West Point application form, according to the National Constitution Center. This forever changed his fate.

19. Rutherford B. Hayes was injured many times in war.

While serving as a Union lieutenant colonel, Rutherford B. Hayes was struck by a musket ball that shattered his left arm. He would then suffer from four other injuries, according to the History Channel.

20. James A. Garfield appointed four Black men to his administration.

James A. Garfield was an advocate for Civil Rights. As a result, he appointed four Black men to council his administration, something that was still novel at the time. These men included Frederick Douglass, who served under three other presidents too, according to the National Park Service.

The Chinese Exclusion Act stopped Chinese immigrants from coming into the U.S. Chester Arthur tried to veto it, but Congress overrode him, according to the History Channel.

Grover Cleveland’s first career was as a teacher at the New York Institute for the Blind. He then went into law and became president, according to the Constitution Center.

To win the election, Benjamin Harrison used a new tactic: not leaving his home state. A front-porch campaign means Harrison spoke to people near his home in Indiana, connecting to them, according to the White House.

24. Grover Cleveland is both the 22nd and 24th president of the United States.

Grover Cleveland had an untraditional second term — it wasn’t consecutive like most presidents, according to the Constitution Center.

William McKinley was the man that led to the annexation of Hawaii. He thought the island might prove strategic in future wars, according to National Archives.

Sometimes, the pen is more powerful than the sword! Theodore Roosevelt wrote 35 books and 150,000 letters in his lifetime, according to the Constitution Center.

Scenario: Abraham Lincoln and William Taft battle it out while wrestling. Taft was a heavyweight wrestling champion at Yale, weighing 243 pounds, according to the Constitution Center.

Woodrow Wilson was the first person to host a live remote national radio broadcast, according to the Constitution Center. Americans liked it — the next day, 20,000 people showed up to his house to hear him again.

29. William Harding was the first president to visit Alaska.

Alaska had been a territory since 1912. Yet, no one visited it until 1923 when William Harding decided to give it a try, according to the History Channel.

It must’ve been destiny — Calvin Coolidge was the only president to be born on July 4.

Hoover is a misunderstood man. Although he didn’t handle The Great Depression very well, he headed the American Relief Administration, helping millions of people eat in war-torn countries, according to the History Channel.

No one ever said presidents had to serve two terms — but it was an unwritten social rule. Franklin Roosevelt didn’t get the memo though and served for three terms, winning each election in a landslide.

Harry S. Truman’s parents couldn’t decide on a middle name, so they just named the poor kid “S.” In reality, the S just stands for S, according to the Constitution Center.

There’s nothing more 50s than a green lawn. Dwight D. Eisenhower understood that — that’s why he banned squirrels from stepping on the White House lawn.

If there’s one thing to learn from this list, it’s that presidents had pretty cool hobbies. John F. Kennedy liked to write — his book “Profiles in Courage” won a Pulitzer, although some people think it was ghostwritten.

The 60s were a time to embrace change. Lyndon B. Johnson did so and signed the Civil Rights Act of 1964, which prohibited discrimination based on race, color, religion and banned segregation.

37. Richard Nixon was a musician.

Although he never learned to read sheet music, Richard Nixon knew how to play saxophone, clarinet, accordion, piano and violin.

Betty Ford was one of the most popular first ladies. She used her position to advocate for women’s rights and to speak about breast cancer, which she suffered from, according to the History Channel.

The Carter Center focuses on human rights and disease prevention. Jimmy Carter also pushed Habitat for Humanity forward, too. He later earned a Nobel Prize for his humanitarian efforts, according to the Constitution Center.

Jelly beans were Ronald Reagan’s favorite candy, and his favorite flavor was licorice, according to the Constitution Center.

While serving as the captain of Yale’s baseball team, George H.W. Bush got to meet Babe Ruth and to take a quick picture with him, according to the Constitution Center.

42. “Socks” was the most famous presidential pet.

43. George W. Bush skipped out on football and danced instead.

George W. Bush was a cheerleader! So, were Franklin D. Roosevelt, Dwight D. Eisenhower and Ronald Reagan. The cheerleader to president streamline is looking pretty good.

As a teenager, Barack Obama worked at Baskin-Robbins in Hawaii. Following those experiences, he decided he’d rather skip out on ice cream in future.

45. Melania Trump was the first foreign-born first lady in a while!

Joe Biden’s campaign spent $10,000 on ice cream because it’s Biden’s self-proclaimed weakness. In his defense, the ice cream was mostly for his donors. But, still, that’s a lot of ice cream.