Home » latest post » Should You Be Worried About Your Child’s Attachment to a Toy? 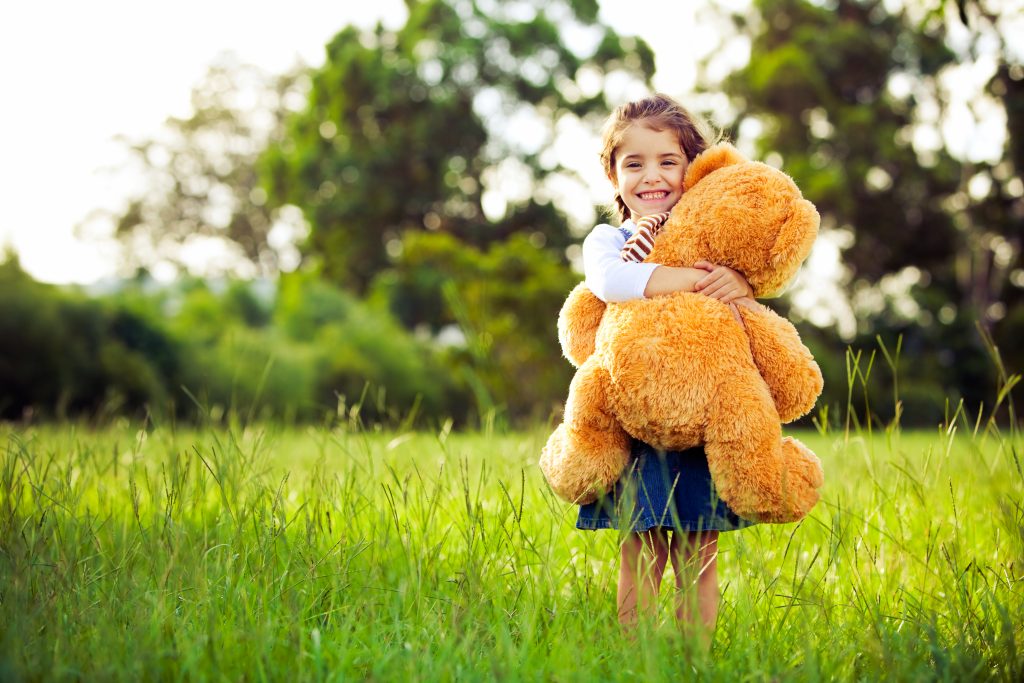 Today, September 9, is National Teddy Bear Day! Who didn’t have a favorite teddy bear or stuffed animal that they loved as a young child? In fact, a third of adults admit they can’t bear to part with their own childhood toy, according to research published in the Journal of Cognition and Culture in 2010. If you have a toddler, you may observe them become attached to an object or article of clothing. In fact, they may insist on bringing this item with them most places, including preschool or daycare or on a trip to a grandparents’ home. But, can you child’s attachment to a toy become a problem?

What the experts say:

These attachment items have been labeled by child psychology as transitional objects. While the value or detriment of these items have been actively debated over the years, most psychologists and experts today agree that these types of attachments are not unhealthy at all, and may actually lead to a higher level of self-esteem and comfort.

According to the International Journal of Behavioral Development, about 60-70 percent of children in the United States and United Kingdom have a transitional object, usually a stuffed toy or blanket. A child’s attachment to a toy usually peaks at around 3 years of age, but many children maintain a strong relationship that can last well into adulthood.

Babies are born wanting to be held as close as they were in the womb. This feeling of closeness to someone is largely born out of being held by their mothers, and then fathers. In fact, many refer to the three months after birth as the fourth trimester. As babies age, they still feel the urge to be close or cuddled. In many Western societies, as children become toddlers and are transitioning to sleeping alone more often, they find comfort in these transitional objects. In other societies in which co-sleeping is more common, these objects are found less.

According to the New York University Psychoanalytical Institute, the transitional object may be classified as one of three ways; as a phase in a child’s development, to fight separation anxiety, and finally, as a neutral sphere in which experience is not challenged by using their creativity. In fact, many daycares and preschools do allow these transitional objects into the classroom with the child to ease that anxiety and fear that comes with evolving into a new environment.

Studies and experts point to having a beloved piece of clothing or a stuffed animal as a toddler is not harmful and can be healthy.

Colleen Goddard, child development specialist and adjunct instructor at New York University, writes that “I have had the distinct pleasure and privilege to observe teachers in the school where I work, dedicated to celebrating the presence of transitional objects in their classrooms. In one of my daily visits, I was delighted by the number of stuffed animals, rag dolls and teddy bears that were abundantly present and harmoniously integrated into the work and play of the children in the fours room…I witnessed the integration of these beloved objects in numerous ways and in a variety of areas in the room.”

All of these studies and experts point to one general premise; having a beloved piece of clothing or stuffed animal as a toddler is not harmful and can, in fact, be healthy. A study published in Child Psychiatry and Human Development found that kids with strong bonds to transitional objects have stronger attachment to a parent and are happier than those without.

If you have worries:

For those parents who may be concerned about the level of attachment a child expresses; for example, a child is beyond preschool age or cannot perform simple tasks without their transitional object can look to some simple ways to “soften” the attachment.

Most pediatricians warn to never make a child feel bad about their attachment and to not try and slowly wean that attachment during a big childhood milestone or family transition (divorce, death, a family move or new sibling). Experts agree it’s much easier to provide a compromise such as allowing an item to “live” in a backpack during school hours or “wait for the child” in their bed at home.

Educators and experts have found that most children grow out of these serious attachments by age 4, but research has shown that teenagers who still hold a strong attachment to a transitional object, may have poorer mental health. A Journal of Personality Disorders study concluded that keeping a comfort blanket for the sentiment it fulfills is fine, but still needing it on a day to day basis as a teenager or beyond, could be a sign that something is wrong. Parents should consult with a pediatrician or mental health counselor if there is a serious concern.

For most though, it’s clear that the memory and special significance “attaches” itself to many for long after that. Gainesville mom, Roseanne Alexander, recalls how all of her siblings had “blankies” or stuffed animals from their childhood.

“At thanksgiving we were all comparing how our special items held up all these years, as now college kids and older. Everyone still had their beloved items in their rooms at home, all in terrible condition,” Alexander said. “One horsey now has ‘mange’, missing limbs, missing eyes and many scars. One blankie looks like a knot of string. One bunny was actually in good shape after 20 years of love.”

Some Disney World Holiday Festivities Are Canceled This Year

How To Make Family Dinners Fun!

Keeping Your Home Safe From The Outside In