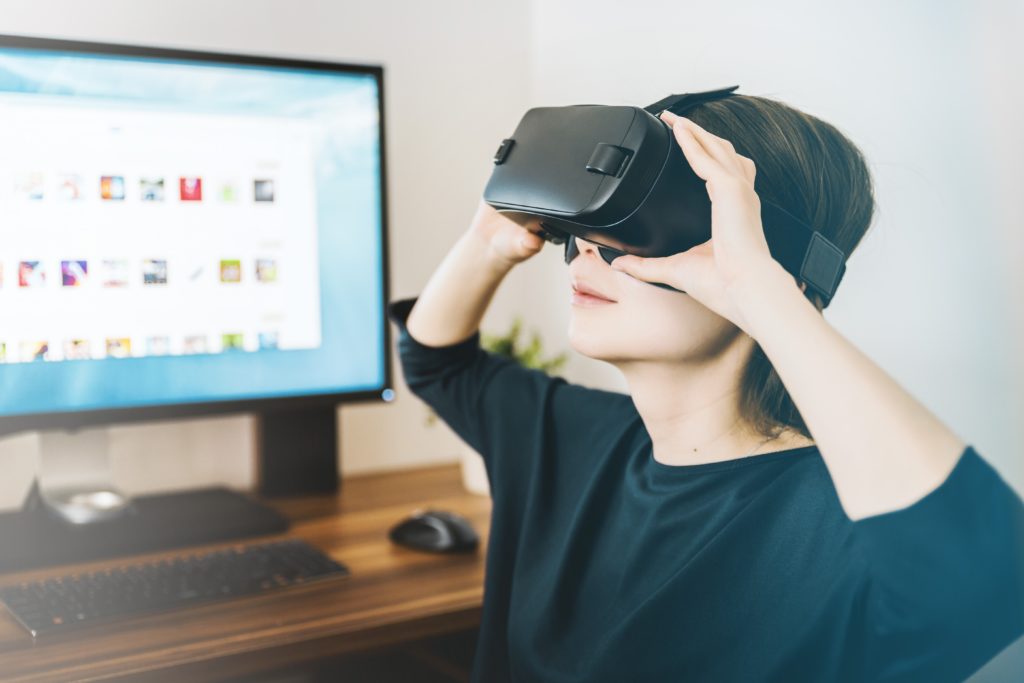 Virtual reality is a term we have heard thrown around for the better part of the last few decades. Whether real or imagined, the concept of entering an environment which we could not otherwise via the wonders of technology, has long been a dream. But now virtual reality (VR) is indeed that—a reality. Virtual reality games are filtering into the video game market at lightning speed—but at what cost (or benefit) to our children?

Virtual reality gaming describes a new generation of computer games with VR technology that allows players to have a first-person perspective of game action. Imagine the insanely popular game of Fortnite experienced in a wholly immersive experience. Or Lara Croft Go, based off of the widely followed Tomb Raider series where the player has to navigate crumbling ruins and solve obstacle mazes.

Participants experience and play the game through a variety of VR gaming devices and accessories, including headsets, sensor-equipped gloves, hand controllers, and other equipment. Virtual reality headsets or multi-projected environments are used to produce realistic images, sounds and other sensations that simulate a user’s physical presence in a virtual environment. A person using VR equipment feels as if they are completely immersed in another world—they can look and move around in the artificial environment and interact with virtual features or items. Games can be played on standalone systems, specialized game consoles, or using advanced laptops and PCs that can power the leading VR headsets. Popular options include Oculus Rift, HTC Vive and Lenovo Mirage Solo.

Some VR games place players in physical combat environments, while others allow them to experience endeavors like car racing and acrobatic flying. Other VR games challenge players to solve problems, move objects, or explore new places.

Five hundred million VR headsets are expected to be sold in the United States by 2025, and games earned 55% of VR software revenue in 2017. Monthly active VR users are up 160% year-over-year on Steam, a PC gaming marketplace, and 76% of children mostly use VR devices to play games.

As more people begin using more VR technology, especially children and adolescents, parents may worry about
the potential dangers of the usage of VR. Unfortunately, there is very little research that has been done into the dangers or addictive characteristics of VR technology. However, we do know the obvious dangers of VR gaming.

The first is the danger of the physical surroundings. People playing VR games should always stay seated and stay clear of other people, furniture, stairs, windows and pets. Another danger is the threat of cyber-sickness which is caused by the conflict between what a person using VR technology is seeing and feeling and what the inner ear is experiencing. Just like seasickness, this type of disturbance can cause nausea, vomiting, headaches, and difficulty in balancing. Younger children may be more at risk as they continue to play even when developing symptoms.

While both of these conditions can be physically disturbances, parents can monitor usage to ensure that these situations do not occur. We don’t yet know the long-term visual effects, but short-term effects can cause headaches, sore eyes, and difficulty concentrating on a visual task.

Parents are likely more concerned about the developmental effects that VR can have on their children. Again because the technology is so new, very little information is available. However, experts warn that VR gaming may have detrimental effects on the brain, depending on a child’s age and development of their neural circuits.

As of right now, researchers have yet to conclusively show that VR has any greater negative impact on child development than television or video games. Most VR technology companies advise that a child be at least 13 before using VR technology. Parents should be warned that children up to age 18 are more affected by these types of experiences and view this VR technology as being more “real.” A University of Zurich study found that children who were younger than 11 years old may lack the “higher-level brain functioning” necessary to remember in the moment that VR isn’t real.

Parents are advised to follow general safety guidelines and best practices like they would for other media. That means limiting VR game time, ensuring that they are well-rounded with other interests and discussing the VR technology with their children to ensure they understand the fact that this is not “true reality.” Provide enriching experiences outside or in nature. When purchasing VR games, ensure that they are age-appropriate and provide some form of enrichment. Be sure to provide enriching, beneficial and age-appropriate experiences for their virtual excursions.

Beyond the potential dangers, there are potential benefits that VR games can provide. For example, there are a variety of fitness games that can help people stay fit. A study published in the Journal of Pediatric Psychology showed that VR games can reduce anxiety and be used in pain management for children undergoing painful medical procedures while other research has shown that it can help children on the autism spectrum learn.

A study in the International Journal of Environmental Research and Public Health indicates that children who play VR games which focus on training the brain have better fine motor skills, balance and mobility. VR gaming can help to improve spatial attention in children and can help children translate the skills they learned in educational VR environments to the real world.

Scientists have also found that the fast-paced games increase adrenaline and dopamine in the brain which helps maintain and improve brain health.

VR gaming can also improve mental flexibility and a child’s ability to quickly switch seamlessly between tasks while facing opposing demands. They also are a great way to reduce stress and depression in children.

Beyond playing games, virtual reality technology and gaming has also become an emerging career field for those interested. There are a number of college degree programs which either focus on virtual reality game design or include it in a component of a degree program focused on video game design. These include both traditional four-year universities and online programs. In 2018, the Savannah College of Art and Design (SCAD) established the country’s first dedicated degree in “immersive reality.” The University of Advancing Technology in Arizona offers a Bachelor of Arts degree in Virtual Reality, and Drexel University has a Virtual Reality (VR) and Immersive Media degree program.

Education does not have to just begin at the collegiate level. In fact, locally, Loften High School, located in East Gainesville, is home to five professional magnet academies, including one focused on Gaming and Mobile Apps.

The Gaming and Mobile App program offers courses that provides knowledge and skills needed to prepare for further education and careers such as a game designer, programmer or developer and includes competency-based applied learning that contributes to the academic knowledge, higher-order reasoning and problem-solving skills, including employability skills. Students in the magnet program work with the same technology and software as today’s design professionals while pursuing traditional art classes in addition to technology-intensive classes.