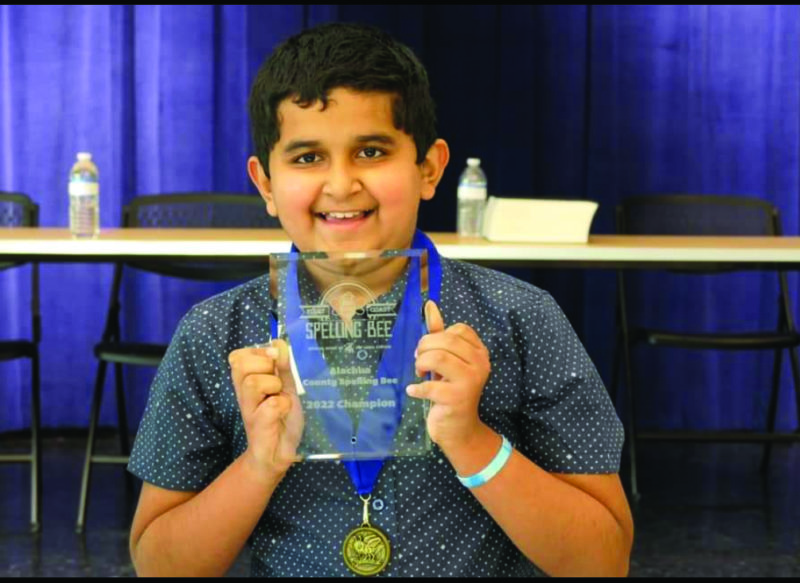 At the beginning of each month, Bindu Joseph opens the door to her home. In her hands, she carries 40 to 50 fictional books for her three children to consume.

Jeevan George, her 11-year-old son, began to develop his word bank through this tradition. Each book he read added a few new words to his mental list, opening his mind.

Four months ago, Jeevan George’s spelling bee journey began at his elementary school. His older sister Rhianna, a former school spelling bee champion, inspired his decision to sign up for Hidden Oak Elementary School’s competition. And, before he knew it, he won the county spelling bee and will compete at the 78th Annual First Coast Regional Spelling Bee on April 1.

If he wins, he’ll advance to the Scripps National Spelling Bee and compete in Washington D.C.

“I really like the complexity and how fun it is,” Jeevan George said. “Not just for the competition, but I like meeting new people.” 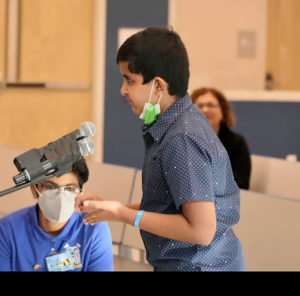 After winning his school spelling bee, Jeevan was given a list of 4,000 words to memorize, his father Jomon George said. While in bed, his mom and sister quizzed the competitor and prepared him for the county competition on February 16.

Jomon George watched his son speak at a podium, decoding each of the judge’s requested words. His son stepped up to the podium each time his turn came at Terwilliger Elementary School’s cafeteria and tried his best, he said.

The room was large, but Jeevan George didn’t feel nervous – he considers himself a social person, liking conversation and learning. Jomon George came to the same conclusion while watching his son act calm and collected on stage.

“I felt like he was never stressed out,” Jomon George said. “Normally, he doesn’t have stage fear.”

Growing up, Jeevan attended a regional Indian ministry and sang and danced to Malayalam Indian songs. His father attributed Jeevan’s lack of fear to his social nature and background.

To decide the final winner, the judges asked a word that wasn’t on the list of 4,000 words. “Churn,” they asked. Somewhere in Harry Potter, Jeevan George remembered reading “churn.” He spelled out the word, “C-H-U-R-N” and won the competition, bringing home the prize.

Winning didn’t matter too much however, Jeevan George said. He competed because he liked talking to the other 34 county competitors. Among those students were schoolchildren of all ages – the eighth graders particularly intimidated Jeevan, but he soon learned they were just like him.

“I felt like they probably knew more complex stuff than me,” he said. “But it all depends on how hard you study.”

Jeevan is an exceptional speller and works hard to expand his vocabulary. His success is a great accomplishment for Alachua County.

Heart Health for Her