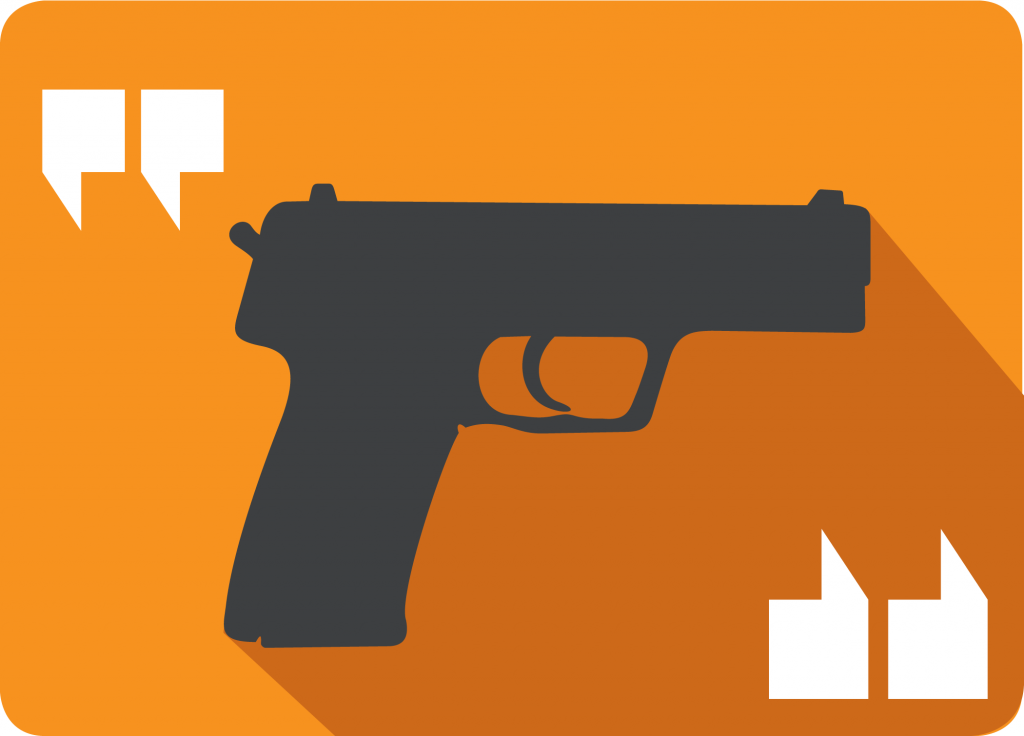 One in three American homes with children has a firearm in the house, according to a survey conducted by the Pew Research Center. Even if you don’t have a gun in your home, chances are your neighbor does. Teaching your children about gun safety is important, regardless of your ideology about guns themselves.

“I was totally against having a gun in my house until my son was old enough to respect it,” said Laurie Wohl, mother of one. She waited until her son, who is a Boy Scout, completed his first gun safety course before they discussed gun ownership as a family. She and her husband purchased a gun with pressure locks so her son wouldn’t be able to fire it until he was bigger. They taught him about gun responsibility and let him see the gun and touch it to avoid curiosity.

“It’s not a novelty,” she said. “I think that is the best way to not have to worry about accidental shootings. If they aren’t curious, they won’t sneak it. Don’t make it a novelty, but a tool.”

Teaching gun safety to your children is important, even if your family does not keep guns in the house. Unfortunately, Anna Henderson* had a young cousin who played with a gun at a friend’s house and accidentally shot and killed himself. She agreed with Wohl, that children need to be educated so they won’t be tempted to play with a gun should the opportunity present itself.

“We have unloaded guns locked in a safe in our house,” Henderson said. “They know never to touch guns in our home or anyone else’s. Ever. They understand guns can hurt or kill people and are not toys.”

Cary Gallop is the Crime Prevention Deputy with the Alachua County Sheriff’s Office. He recommends discussing guns with your children early, as soon as they start asking questions.

“Children begin to ask questions very early in their toddler years,” said Gallop. “I believe that you need to establish safety talks about guns in general as well as toy guns, BB guns, water guns and anything that they might encounter. We have seen a number of intelligence bulletins over the years in law enforcement where people have engineered real gun parts into toys such as a super soaker water gun. Effectively making the super soaker look like a toy but it is a fully functioning shotgun.”

Lee Mason, owner of ArchAngel Gunsmithing Outfitters in Newberry, and Deputy Gallop both advised parents to keep firearms unloaded and locked in a safe with the ammunition locked up in a separate location. Mason said children should be aware of the gun’s location, and parents should teach their children the same safety issues they themselves have learned.

In addition to teaching children each part of the gun and its uses, he suggested having a child complete his first gun safety course at age 8 and then having him continue to attend several courses over the coming years. He said reiteration and practice is best, so if a child is in the presence of a gun without an adult, he or she will have an automatic response and know exactly what to do.

“At age 8 a child accepts accountability, understands responsibility, respect and awareness,” said Mason. “They can begin to understand the complex functions of each part of a firearm. Children should be taught that guns are a harmful tool, like a hammer or a knife, and to use safety precautions.”

Another important component of gun safety is being aware of a person’s surroundings. “You have to teach kids how to read emotions and moods,” said Mason. “Figure out the intentions and mood of the person holding a weapon. Don’t engage with someone with heightened anger or sensitivity. Our stress levels automatically rise when someone is nervous. Teach your children through your own actions.”

If you don’t feel comfortable teaching your children gun safety yourself, you could sign them up for a safety class. RadKIDS is a 10-hour family-centered safety education program that emphasizes essential decision making skills as well as physical resistance options to escape violence. It enhances a child’s natural instincts and increases resilience as well. Gallop said part of the course teaches kids what to do if they see a gun: if you see it out, don’t touch it, run and tell a trusted adult.

“It is my goal to see radKIDS taught in P.E. class of every school in Alachua County,” said Gallop. “We are kicking off the month of October at Micanopy Cooperative Elementary School by teaching radKIDS every day in P.E. to the fifth-graders. PK Yonge has been offering it for the last 10 years and now I want to usher it into every school in our county.”

“I don’t have a gun in my home, but my kids like to play with the neighbor’s kids. How do I ask my neighbor if they have guns in the home without offending them?”

“Start the conversation by asking, ‘How does your family feel about guns?’ This will open the door and facilitate communication about previous and current experiences with guns,” advised Mason, who admits this can be a touchy subject. “If a person has a concealed carry license, they probably have safeguards in place. Many families use shotguns for personal protection or for hunting. If they hunt, they might take the kids hunting, too.”

Help Me Help You: Teaching Your Children To Self-Advocate

Learn More About Pesticides: Is Our Food Safe?

Keeping Your Home Safe From The Outside In