Home » latest post » Hip Dysplasia: What is it and Does My Baby Have it? 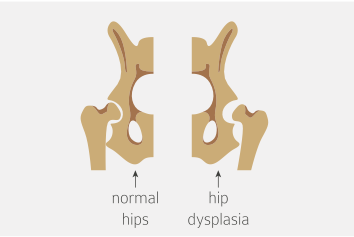 What is hip dysplasia?

According to the Mayo Clinic, hip dysplasia is “the medical term for a hip socket that doesn’t fully cover the ball portion of the upper thigh bone. This allows the hip joint to become partially or completely dislocated.” The hip socket is made of cartilage at birth and eventually hardens into bone.

How common is it?

According to the International Hip Dysplasia Institute, hip concerns among infants are not uncommon:
• 1 in 10 infants are born with instability in the hip (10%) • 1 in 100 infants are treated for hip dysplasia (1%)

If not caught early, hip dysplasia can cause problems later in life.
• 1 in 10 hip replacement surgeries are caused by hip dysplasia (10%)

• Hip dysplasia is 9 times more common in adults than infants.

• Hip dysplasia is the most common cause for arthritis in the hip for adults under age 50.

In the final months of pregnancy, the womb can become cramped and the ball of the hip joint can move out of position. Babies sitting in the breech position, of large size, or firstborn children are more likely to have hip dysplasia. Hip dysplasia also occurs more frequently in girls and tends to have a familial component. Babies who are tightly swaddled with their legs fully extended and hips and knees straight are also at a higher risk of hip dysplasia.

Pediatricians routinely check for hip stability and range of motion at birth and at routine well checks throughout the baby’s first year. Some cases may be hard to detect and the condition can be silent until later in life. Some of the signs of a possible problem include different leg lengths or one hip being less flexible than the other during diaper changes. Once your baby starts walking, they may develop a limp.

As they reach adolescence and adulthood, they could experience pain or instability in the hip, indicating a potential problem. 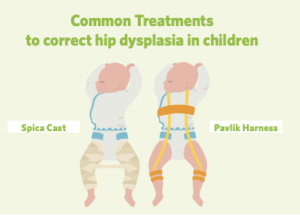 If detected in early infancy, some children wear a Pavlik harness for several months to position the hips correctly and encourage proper growth and alignment. If detected in a baby older than six months, doctors may need to move bones into position and have the child wear a full-body cast called a Spica cast for a few months to correct the placement.

If problems are detected later, some people can do physical therapy while others will need surgery to correct the problem. There are various surgical options depending upon the exact level of the problem and resulting circumstances.

If your baby is diagnosed with hip dysplasia, do not despair. Early diagnosis allows for simpler treatment options. While it might be slightly inconvenient for the parents (especially during diaper changes!), your child won’t remember this brief period and will be prepared to take on the world with strong hips!

Ulcers in Children: What You Need to Know